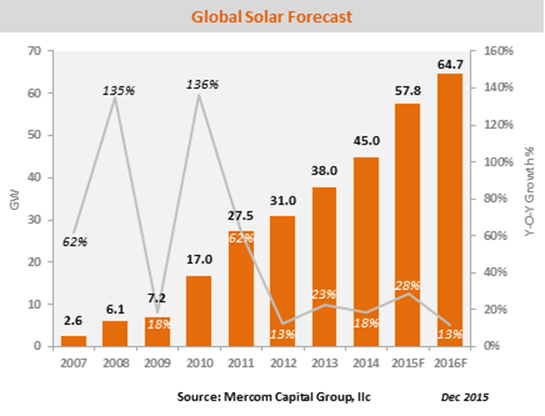 Texas-based Mercom Capital Group LLC forecasts another year of solar growth for 2016, with new installations expected to reach 64.7 GW – up from 57.8 GW for 2015.

Mercom says China will continue to be the largest solar market in the world – installing approximately 19.5 GW in 2016. China has installed almost 10 GW in the first three quarters of this year – well ahead of 3.79 GW installed in the same period last year.

Curtailment and delayed subsidy payments in China remain challenges. Mercom says theÂ government's announcement of an additional 5.3 GW installation quota with a completion deadline of June 2016 for provinces that have met or exceeded their installation goals is likely to help China get close to meeting its installation goals for this year and ensures a strong 2016. The Chinese government is expected to increase its 2020 installation target to 150 GW to 200 GW.

Mercom is forecasting the U.S. to install about 13 GW of solar next year, which will be the best year for U.S. solar installations by far. The U.S. solar market is expected to experience robust growth for the next 13 months as the industry rushes to complete projects before the 30% investment tax credit (ITC) drops to 10%. The industry is hopeful for – but not betting on – a possible extension of the 30% ITC.

The 2016 installation estimates will need to be revised if solar projects are allowed to"begin construction," by Dec. 31, 2016, instead of reaching completion, or if there is an agreement in Congress to extend the ITC in any form.

Japan is expected to install about 9 GW of solar in 2016. The Japanese solar industry has experienced two feed-in tariff (FIT) cuts this year, as the government is looking to trim solar subsidy costs. So far, Japan has approved a little more than 80 GW of solar projects under its FIT program, of which about 25% have been installed.

Japan is going through a transformation in the energy sector, with a change in its energy mix going into 2030, giving more weight to renewables and cutting back on nuclear energy. Japan is also in the process of deregulating its utilities and breaking up monopolies. Japanese domestic solar module shipments have dropped the last two quarters following the reduction in FITs.

In European market activity, Mercom expects the U.K. to lead in terms of PV installations in 2016, followed by Germany and France. There is a lot of uncertainty surrounding the U.K. PV market, with a decision on FIT cuts still pending and renewable energy credits set to expire in April 2016.

Mercom expects Indian solar installations to reach about 3.6 GW in 2016, which is significant growth compared with the 2.1 GW projected for this year. Momentum has picked up after the government set a target of 100 GW by 2022. Aggressive bidding in its recent auctions has caused some concerns as to the viability of these projects due to unrealistically low bids.

The latest India update can be found here.

‘The largest markets in 2016 will, again, be China, the U.S. and Japan,’ says Raj Prabhu, CEO and co-founder of Mercom Capital Group. ‘The U.S. is set to overtake Japan as the second-largest solar market behind China. These three countries will account for about 65 percent of installations next year.’ 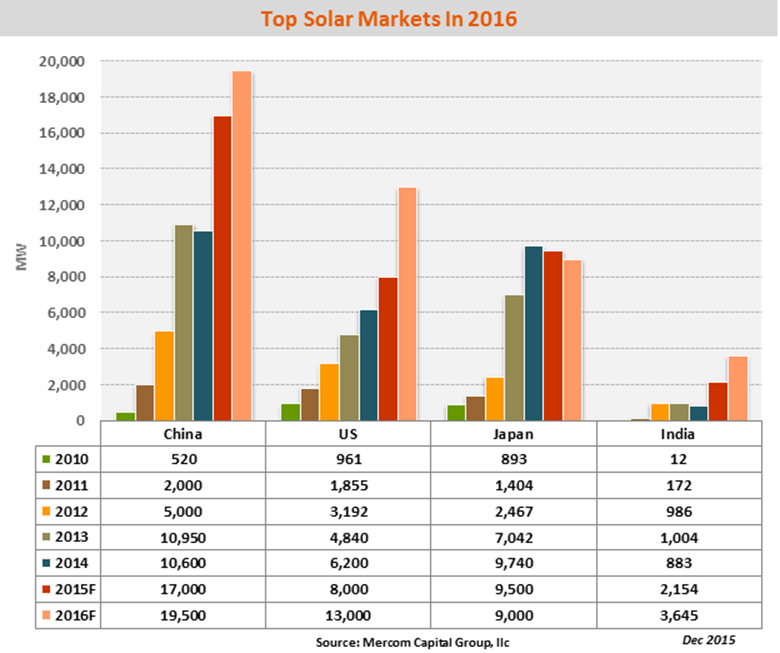