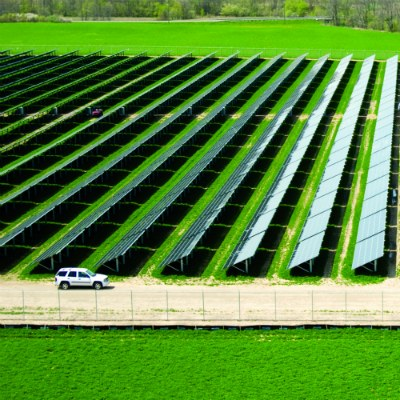 Germany-based Belectric maintained its position as the world's largest PV system integrator in 2011, with close to 400 MW of new PV capacity developed, according to a recently released report from IMS Research (recently acquired by IHS Inc.).

However, Chinese integrators – buoyed by the huge boom in domestic power plants – achieved the biggest gains, and made up three of the top 10 PV integrators in 2011.

IMS Research's quarterly report, which tracks the activities and pipelines of more than 550 global system integrators and engineering, procurement and construction (EPC) contractors, found that Belectric held on to its No. 1 position for the second year in a row. The company was followed closely behind by China Power Investment Corp. (CPI), which was responsible for 380 MW of new PV capacity in China in 2011. 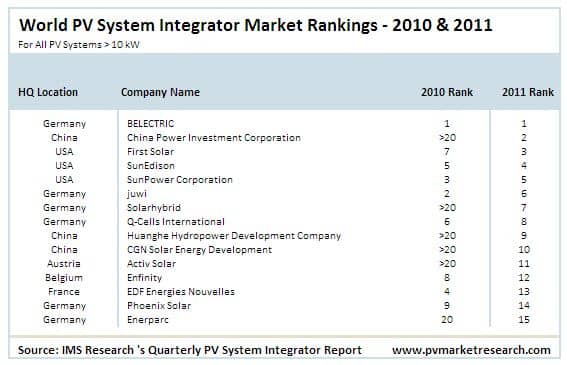 ‘Most European system integrators had another solid year in terms of project development, highlighted by Belectric's top ranking again,’ says Ash Sharma, senior research director for PV at IMS Research. ‘But it was really the U.S. and Chinese companies that shone in 2011 and far outpaced the rest of the pack – not surprising given their domestic markets' huge utility-scale deployment in 2011.’

Although the biggest gains were made by Chinese integrators, several U.S.-based companies also exhibited strong performance, in terms of project completion. First Solar, SunEdison and SunPower ranked third, fourth and fifth, respectively, on the list.

IMS Research also found that, although Chinese suppliers made the biggest gains in 2011 and had three of its integrators ranked in the top 10, Germany companies dominated the rest of the rankings.

‘Of the top 30 PV system integrators globally, 24 of these were European – showing that although Europe's share of installations is dropping sharply, its system integrators are still able to maintain their stranglehold on the market – for now, at least,’ Sharma notes.

The supply of components to the PV industry has become more concentrated in recent years, but the development and installation of PV systems remains fragmented, with the top 30 companies accounting for under a quarter of global non-residential PV installations, according to the report.

‘The growing number of multi-megawatt ground-mounted PV projects last year did, however, go some way in reversing this trend, as many companies were able to climb high up the rankings on the back of just one or two projects,’ Sharma points out.

‘We expect this [trend] to continue in 2012, particularly as markets such as China, India and the U.S. become more dominant and their preference for very large installations drives further concentration,’ he adds.