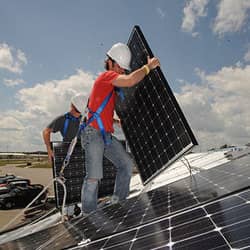 Although well known for its thriving wind energy industry, Iowa has yet to become a major player in the U.S. solar market. With the right policies in place, however, the relatively irradiance-rich state could deploy a significant amount of solar power and, in doing so, add millions of dollars to its economy, according to a new study from The Iowa Policy Project (IPP).

Installing 300 MW of PV – which the IPP calls a ‘reasonable, yet robust target that would have a minimal impact on consumer rates’ – over the next five years would create an annual average of 2,507 new jobs, the IPP says. Approximately three-quarters of the positions would be related to local project development and installation, and thus, would not be at risk of being outsourced.

‘Solar manufacturing jobs have not been included in the analysis, but they could represent significant additional benefits to Iowa's economy,’ the report adds. ‘In fact, solar creates more jobs per megawatt-hour than any other energy technology.’

Using an economic model incorporating local, Iowa-specific coefficients, the IPP also found that deploying 300 MW of PV would inject more than $174 million annually into the state's economy. The industrial output would average an additional $302 million annually, and the average annual income of labor income or wages (which the report counted as a subset of the $174 million value added) would be nearly $100 million.

These numbers are all attractive, but of course, they are all merely hypothetical. In its current political and economic environment, how can Iowa make this 300 MW solar deployment a reality on its rooftops and on the ground?

‘Iowa has almost all the right ingredients on hand: a demonstrated ability to be a renewable energy leader with wind power, a solar energy industry that already employs people across the state, and more sunshine than New Jersey or Germany, both leading solar markets,’ the report points out.

Unfortunately, the one missing ingredient in Iowa – favorable state policy – is a critical one. ‘Where solar power is flourishing, it is because good policy has made solar energy accessible and offered reasonable incentives to drive private investment in solar technology,’ the IPP says.

In particular, U.S. states with rapid solar installation growth – including New Jersey, Florida, Arizona, Massachusetts and Texas – all feature at least one significant financial incentive and/or a solar carve-out in their renewable portfolio standard (RPS). Although Iowa offers supportive net-metering and interconnection policies, some other major state-level policies have yet to clear legislative hurdles.

State File (SF) 99, which would establish a solar energy rebate program for homeowners and businesses, remains one of the most compelling – and important – pieces of solar-related legislation in Iowa. Introduced by State Sen. Joe Bolckum, D-Iowa City, SF 99 would require $10 million in appropriations to provide up to a 30% rebate on PV and solar thermal installations.

As proposed, SF 99 would allocate 60% of funds to commercial and agricultural applications, with the remaining 40% designated for residential applications. Maximum awards would be $15,000 for a commercial or agricultural installation and $3,000 for a residential installation. The legislation is currently under consideration by the Iowa State Legislature.

Meanwhile, in addition to the incentive program in SF 99, the IPP also recommends that the state explore other options – such as production-based incentives, an RPS carve-out and low-interest finance programs – to help spur solar adoption in Iowa. Then, perhaps that 300 MW number – and its associated economic rewards – may no longer be so unrealistic after all.

‘As the state gains more experience with solar energy, we encourage Iowa policymakers to adopt the 300 MW solar goal as a powerful tool to put Iowans to work in this vibrant new economy,’ the IPP concludes.