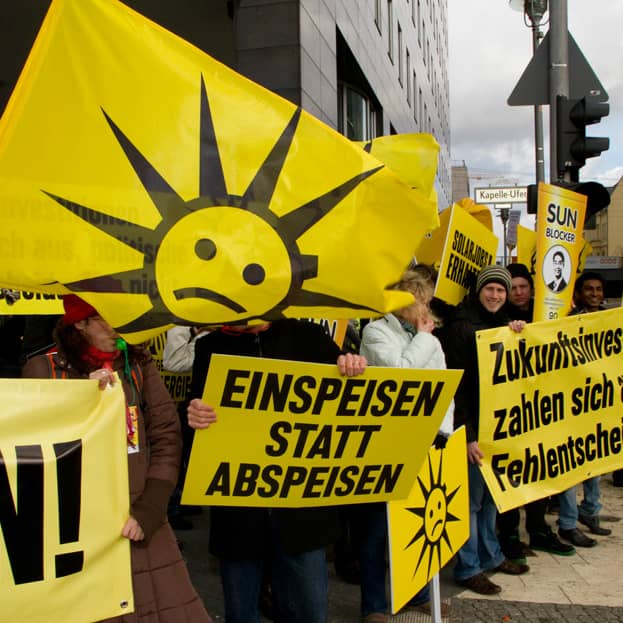 Germany's government has delayed to April 1 the implementation of controversial solar feed-in-tariff (FIT) reductions in Germany, which were originally scheduled to go into effect this Friday. The announcement follows a massive industry-led protest against the FIT cuts earlier this week.

George Nuesslein, an energy spokesperson for the Christian Social Union political party, told Bloomberg that German Chancellor Angela Merkel and other officials have officially decided to postpone the start date of the entire FIT revision plan to April 1.

The government also plans to allow large-scale PV project developers that complete their installations before June 30 to receive a FIT. Under the new FIT scheme, PV projects 10 MW and larger are no longer eligible for incentives.

The latest version of the legislation, however, maintains other components of the previously announced FIT reduction plan, according to a draft obtained by Bloomberg.

On Monday, approximately 11,000 protestors descended on Berlin to decry that plan, which they termed a ‘solar phase-out.’ The demonstration, organized by the Germany Solar Industry Association (BSW-Solar), was designed to encourage the German Bundestag and Federal Chancellor to ‘forego additional cuts in the support for solar power, which is already in rapid decline,’ BSW-Solar said in a statement.

According to BSW-Solar, if the existing legislation goes into effect in its current form, the solar sector could face a market downturn of up to 75%, resulting in numerous industry bankruptcies. Moreover, ratepayer savings would total just 0.30 euros per month over the next two years, BSW-Solar said in a recent announcement, citing figures from Prognos AG.

The threat to return on investment (ROI) for PV – particularly in the residential sector – under Germany's new FIT plan, however, may not be as drastic as feared. A new analysis from information and analytics provider IHS iSuppli found that some market segments will remain ‘attractive’ and continue to find ample investment.Â Â

‘The reductions in the FITs mean that the success of the German PV market in 2012 will hinge on its capability to generate an attractive ROI based on free-market dynamics, rather than on government incentives,’ said Dr. Henning Wicht, director and principal analyst for photovoltaics at IHS, in an announcement of the study.

‘To justify investments, those who install solar systems must pay their own way to a much larger degree than before, either through their own consumption of electricity or from power sales to others,’ he continued. ‘Although this is likely to lower the ROI on solar installations in Germany, returns are likely to remain attractive enough to attract financial support.’

New financial realities
Residential PV installations in Germany will produce an ROI of 10% on equity capital (20%) under the new FIT plan (assuming system prices of 1,850 euros/kW), according to IHS iSuppli's analysis.

For larger rooftop systems (up to 1,000 kW), the ROI is less certain and highly dependent on the proportions of electricity consumed on-site and sold via power purchase agreements (PPAs). An installation that consumes approximately 30% of the PV electricity it generates, for instance, can still achieve a 10% ROI if the system price remains below 1,400 euros/kW.

This type of installation ‘approaches the limits of what is possible today,’ IHS iSuppli pointed out in the report. Rooftop systems without local electricity consumption must remain under even lower system-price thresholds (1,250 euros/kW) in order to reach a satisfactory ROI.

Overall, the true impact of the FIT cuts on the world's largest PV market may come down to investor sentiment. IHS iSuppli predicts that investors will remain interested – albeit less enthusiastically – in projects with ROI rates as low as 7% or 8%.

But the PV industry and its customers will be forced accept some new market realities: On-site electricity consumption and PPAs must be emphasized – a task that will require adaptation on the part of engineering, procurement and construction (EPC) contractors. Additionally, European component suppliers must achieve critical price reduction in order to remain competitive, according to the report.

‘Once the supply chain – and, in particular, the EPCs – has modified its services, large installations can pick up again,’ IHS iSuppli concluded.