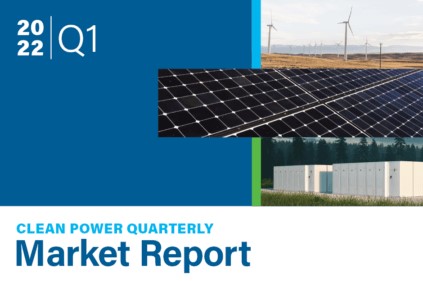 While these gains contributed to a record first quarter for clean power installations, the rate of growth slowed to 11% in the first quarter of 2022, compared to the 50% year-over-year growth rate reported between 2019 and 2021.

“The record-breaking quarter for clean power is encouraging, but the industry still faces many hurdles that are stalling growth,” says ACP CEO Heather Zichal. “Ongoing uncertainty from the Department of Commerce’s unwarranted solar tariff case, the unsettled fate of clean energy tax credits, supply chain issues and inflation are all making investment and planning decisions a difficult challenge. The industry needs resolution and policy clarity if we are to meet the Biden administration’s clean power goals of reaching a net zero grid by 2035.”

While solar installations slowed in the first quarter of 2021 due to pandemic-related challenges in the supply chain, inflation, trade risks and lack of regulatory certainty, the industry is facing another significant obstacle as it looks beyond Q1 with the Department of Commerce’s inquiry into solar manufacturing in Southeast Asia.

This report provides an update on the Department of Commerce’s decision to initiate a review of a petition to apply anti-dumping and countervailing duties against solar module manufacturers located in Southeast Asia. ACP finds that the inquiry has had a chilling effect on the U.S. solar industry – both immediately and over the next two years. Prior to Commerce’s decision to initiate this inquiry, market researchers anticipated 17 GWdc of utility-scale solar capacity to be added to the grid in 2022 and nearly 20 GWdc in 2023. ACP’s market impact survey indicates at least 65% of the projected crystalline silicon (c-si) market across 2022-2023 is already at risk of cancellation or delay. The most common reason for delay or cancellation is lack of module availability.

While the industry currently sits on a record volume of clean power capacity in the pipeline, the rate of growth of that pipeline is also slowing. The pipeline grew by just 4% during the first quarter – much lower than the 12% quarterly expansion experienced throughout 2021. There are almost 1,100 projects in the pipeline with a total operating capacity of 125,476 MW. This includes 40,522 MW of projects under construction and 84,953 MW in advanced development.

In total, 14.8 GW of capacity has been delayed as of the end of the quarter. At the end of 2021, 11.7 GW of clean power projects experienced delays. Of that, 3,440 MW have since come online. However, an additional 6,576 additional MW of clean power projects experienced delays during the first quarter, bringing the total delayed capacity to 14.8 GW. Based on ACP’s analysis, on average these projects have been delayed by seven months.

Solar projects are the most prone to delays, with 8.6 GW of solar projects currently delayed. Solar accounts for 58% of all projects delayed and 60% of projects delayed that were expected online this quarter. These project delays occurred before the Department of Commerce initiated their review at the end of Q1, and the inquiry is expected to affect solar deployment through 2023. Wind makes up 31% of total delays in the first quarter of 2022, and battery storage makes up 11% of delays.

Despite regulatory headwinds, solar continues to be the leading technology in the pipeline, accounting for 56% of all clean power capacity in development. Land-based wind accounts for 19% of the pipeline, offshore wind represents 14%, and storage claims the remaining 12%.

The largest projects to come online in the first quarter include Traverse Wind Energy Center in Oklahoma owned by AEP and developed by Invenergy (998 MW) as well as Slate Solar+Storage in Kings County, Calif., which was the largest hybrid project (300 MW of solar capacity and 140 MW/561 MWh of battery storage capacity). Valley Center Battery Storage Project, owned and developed by Terra-Gen, in California has a 140 MW battery system with 560 MWh of energy storage capacity.

Power purchase agreement (PPA) announcements saw a significant decline, down 10% from last quarter and 15% from the first quarter of 2021. For the quarter, companies announced 6,339 MW of new PPAs. Corporate buyers were among those more hesitant to sign on to new clean power PPAs. Commercial & Industrial (C&I) offtakers announced 3,309 MW of new PPAs this quarter, a notable 46% decline from the first quarter of last year. According to LevelTen, PPA prices rose across all regions and technologies this quarter due to supply chain disruptions and increasing prices of commodities and labor.

The top corporate purchasers in the first quarter were Verizon (859 MW of new PPAs), The Markley Group (400 MW) and QTS Reality Trust (350 MW).

In February, the Bureau of Ocean Energy Management held a lease sale for six commercial lease areas in the New York Bight with the potential to generate up to 7 GW of clean energy. The auction lasted three days and brought in $4.37 billion in federal revenue.

New York State broke ground on the 130 MW South Fork Wind Project as Ørsted and Eversource’s joint venture announced the approval of the final investment decision for the project, which is expected to be operational by the end of 2023.

At the end of March, the House of Representatives passed H.R. 6865, the Coast Guard Authorization Act. Among many provisions, this bill would impose citizenship-based restrictions for crews on foreign-flagged vessels operating in the U.S. Outer Continental Shelf. ACP is actively engaging with the Senate and White House to prevent this policy from becoming law as it would seriously impede offshore wind deployment and progress toward the U.S. goal of deploying 30 GW of offshore wind by 2030.