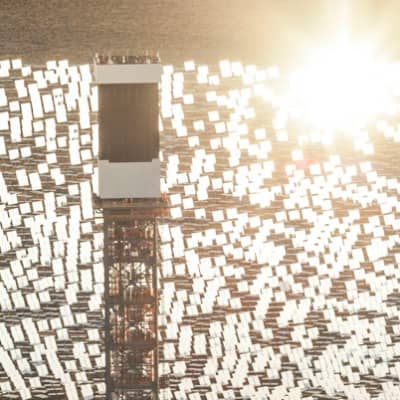 The U.S. uses more water to cool power plants than is used for agriculture. And as the drought in the western U.S. continues, advocates maintain that meeting electricity demands with renewable energy such as solar and wind can reduce water consumption in an area of the country sorely needing relief.

‘The ongoing, 15-year drought in the Colorado River Basin is the worst we've seen since the river was allocated a century ago," says Stacy Tellinghuisen, senior energy and water policy analyst at Boulder, Colo.-based Western Resource Advocates, a conservation organization." In California, drought conditions are exceptionally bad and – for water users in that state – likely reaching alarming levels.’

According to Tellinghuisen, nuclear power plants use 609 gallons of water/MWh for cooling purposes, while wet-cooled western coal plants typically consume around 550 gallons of water/MWh. Combined-cycle gas plants are more water efficient largely due to their configuration, she explains, adding that such plants use about a third as much water as a typical coal plant.

BrightSource and its partners, NRG Energy and Google, own the Ivanpah Solar Electric Generating System, a 392 MW power tower CSP plant that was dedicated last week and is not in full commercial operation. Desmond says Ivanpah's annual water consumption is projected to be about 15% as much as a coal plant.

According to BrightSource, the steam production cycle runs on a closed-loop system, while general conservation measures filter water back through the unit, helping to further reduce usage.

"The Ivanpah application for certification was filed with the California Energy Commission in 2007 and specified dry cooling long before the recent drought began," Desmond says.

While several factors will determine the long-term prospects of CSP – such as cost, technology development and renewable portfolio standards – industry advocates say that dry cooling could be the secret weapon in the water conservation fight.

‘The growing scarcity of water is arguably becoming our number-one global issue,’ says Bob Gibson, spokesperson at the Washington, D.C.-based Solar Electric Power Association. ‘Electric generation resources that use little or no water are going to be that much more valuable.’

Although the technology is still evolving industry-wide, he says, dry cooling could be a great advantage to the future of CSP.