Home Solar News After Massachusetts’ ‘Godfather Of Solar’ Exits, Will The New Gov. Step Up? 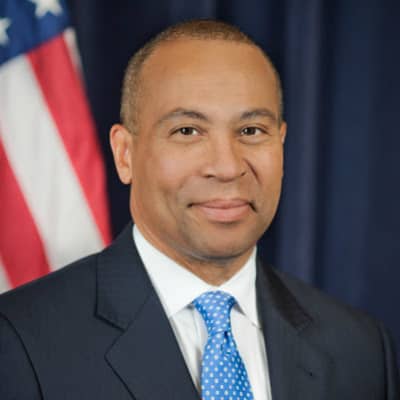 When it comes to solar advocacy, Massachusetts' next chief executive will likely have big shoes to fill. That's because Gov. Deval Patrick, D-Mass., is term-limited and, therefore, cannot seek re-election on Nov. 4.

While the gubernatorial candidates – Democrat Martha Coakley and Republican Charles Baker – have said the right things about renewable energy, the next governor is unlikely to match their predecessor's zeal for renewable energy, particularly solar. Patrick is credited for the state's market-leading solar status.

However, with the help of several state programs – such as the Green Communities Act, which helped raise the renewable energy mandate under the state's renewable portfolio standard (RPS) and net-energy metering tariff – the industry really took off.

By putting Massachusetts solar on the map, some laud Patrick as a rockstar.

‘If James Brown was the godfather of soul, then Deval Patrick is the godfather of solar in Massachusetts,’ quips Ken Johnson, spokesperson at the Solar Energies Industries Association (SEIA). ‘This remarkable growth is due, in no small part, to Patrick's vision, persistence and leadership.’

‘While no man is an island – and solar growth required the hard work of many in state governmentÂ – Patrick is the number one reason the state's solar industry is flourishing,’ says Mark Durrenberger, president and founder at Hudson, Mass.-based installer New England Clean Energy. ‘Patrick has made Massachusetts a national clean energy leader.’

John Lamontagne, spokesperson at Boston-based renewable energy developer First Wind agrees. ‘Gov. Patrick has been a tremendous advocate for solar power and has quarterbacked an explosion of growth here in Massachusetts,’ he says.

Just the same, the state struggled to manage its growth – the first real signs that Massachusetts solar had become a victim of its own success.

For example, last summer lawmakers worked on a comprehensive bill (H.4185) that would have, among other things, formalized Patrick's 1.6 GW of solar energy by 2020 goal and extend the net-metering cap. The net-metering credits (NMC) program had come very close to hitting its cap, which would have ended a useful financing mechanism for projects currently in development.

Although the bill failed to pass, the legislature did advance S.2214, a bill that extends the current net-metering cap on private projects to 4% of each applicable utility company's highest historical peak load.

‘[H.4185] was extremely controversial and rattled a lot of commercial-scale developers active in the commonwealth,’ says Jennifer Simon Lento, an associate at Boston-based law firm Nixon Peabody. ‘The bill that passed is considered by most folks to be a pretty weak bill in that it simply extends the NMC cap.’

All in all, most contacted for the story suggest that history will look back favorably on Patrick's solar legacy.

‘Whoever replaces Patrick will have some big shoes to fill,’ says SEIA's Ken Johnson.

Waiting in the wings
Gubernatorial hopefuls Coakley and Baker have each stated that Massachusetts' energy future depends on a strategic mix of fossil-based and renewable energy resources.

Coakley, for example, has stated that she intends to continue to push to meet or exceed the greenhouse-gas (GHG) emissions reduction goals set by the Green Communities Act, the Global Warming Solutions Act and the state's 22.1% by 2025 RPS.

Baker, a Republican running in a Democratic stronghold, has been less forthright in his support of renewable energy and GHG reductions, according to Simon Lento, adding that he is more heavily focused on the impact that several fossil-fuel plant shutdowns have had on energy rates in the state.

"It's interesting to note that I couldn't find any environmental references on Baker's website," says New England Clean Energy's Durrenberger.

With Patrick out of the governor's mansion, industry advocates eagerly await how, or even if, his successor will carry out his solar legacy.

‘Both candidates are fairly tepid on solar,’ says a finance director at a major solar investment firm who wished not to be identified, adding that it remains a question if they will change or amend Patrick's programs. ‘It is possible that terminating Patrick's programs could entail the threat of a takings lawsuit by parties who feel the value of their solar systems had been diminished by a new administration.’

Just the same, says the source, it is possible that Patrick's successor may simply stay the course.

Whomever prevails, Durrenberger would like to reframe the debate around solar's true value – meaning the monetary value of peak load shedding, improved grid stability, increased fuel diversification and reduced healthcare costs from improved air quality should be factored into future discussions.

‘Our hope,’ says SEIA spokesperson Johnson, ‘is to develop a similar working relationship with the state's next governor – given solar's growing importance to both the economy and environment.’