Home Solar News Are Solar Shingles Coming To A Rooftop Near You? 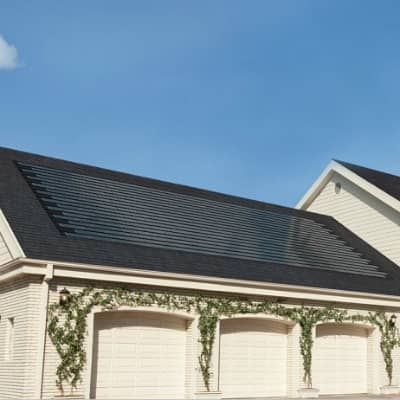 In 2005, solar shingle technology burst onto the solar scene with lofty intentions. Advocates noted the technology would not only revamp photovoltaic solar installation, but transform traditional construction and building methods.

Also referred to as building integrated PV, solar shingle technology combines the performance and protection of a conventional asphalt roof with an integrated PV system. Additionally, because solar is embedded into the structure's outer membrane, owners could still get the benefits of PV but without rooftop racking costs, an area of substantial savings.

However, after nearly a decade, the revolution has not moved much beyond its early hype.

‘The technology is still very new and the market still has on its training wheels,’ says Matt Feinstein, senior analyst who leads solar research at Boston-based consultancy Lux Research.

For starters, Feinstein notes, the biggest challenge confronting solar shingles has been its inability to compete with rooftop solar, which is cheaper and more reliable. And because they are part of the building's physical infrastructure, solar shingle technology must meet strict building codes – an added hurdle.

‘If aesthetics are the only thing the technology has going for it, it's probably going to fail,’ Feinstein says.

Complicating matters, he says, is that there is no clear-cut market leader, as thin-film and crystalline silicon are competing head-to-head, like they do in the broader solar market.

According to the Solar Energy Industries Association (SEIA), crystalline silicon panels have higher electricity output per square meter (m2), but greater costs and design constraints. Thin-film materials generate less electricity per m2, but are less expensive and may be integrated more easily onto more surfaces, the association says.

Early entrants, such as the partnership of Solexel and Owens Corning, came into the space but succumbed to the challenges often encountered by start-ups. For example, a particular challenge was configuring existing solar balance-of-system technologies developed for mounted solar panels for shingle applications.

Currently, there a few providers in the space, such as CertainTeed, SunPower and Dow Solar, a subsidiary of Midland, Mich.-based Dow Chemical.

In 2009, Dow developed the Powerhouse solar shingle, a photovoltaic solar panel in the form of a solar roofing shingle that can be integrated into rooftops with standard asphalt shingle materials. However, to ensure reliability, the company spent two years testing and certifying the product. By Oct. 2011, the product was available for the U.S. market.

The product is certified by UL and recognized by the International Code Council as an approved building material, says spokesperson Josh Wimble, adding that the solar shingles meet building code requirements for weather-durable roofing material.

‘It's commonly believed that solar shingles are only available in really limited regions, as they were when launched a few years ago, but we've expanded to 19 states and all Canadian provinces,’ Wimble says.

He notes that pricing has also improved – although each roofer and builder sets the price for their purchasers, improvements in rates pass on to homeowners – while options like financing make the return on investment much more immediately tangible.

‘The savings homeowners are generating through utility off-set will quickly begin to outweigh their financing payments,’ Wimble says.

Like any emerging technology, providers of solar shingle technology will need to continue to improve the product if it is to truly compete with rooftop solar.

‘New construction would be the best bet for solar shingles to proliferate,’ Rodriguez says.

A tall order. Yet…

‘Who knows,’ Rodriguez says, considering. ‘There might be an application or opportunity out there no one has thought of that might make all the difference.’