The City of Kerman, Calif., has installed a 487 kW solar array to provide electricity for its wastewater treatment facility. Borrego Solar performed the engineering and construction services. Through a 20-year power purchase agreement with New York-based owner ConEdison Solutions, the solar plant will supply 70% of the plant's electricity and generate 940 MWh of electricity annually.

According to Kerman Mayor Gary Yep, the wastewater treatment facility, which had recently undergone a $6.7 million upgrade, will enable to city of about 14,225 people to grow to 30,000.

‘We took a look at our peak electric bill and decided to go solar,’ Yep says.

The city estimates the solar power installation will achieve a 40% net reduction in the treatment plant's electricity costs, which comes to a savings of more than $95,000 per year.

‘There was a learning curve, including new nomenclature," says City Manager Luis Patlan, who spearheaded the solar project for Kerman." We had considerations of buying versus leasing. We gained a lot of technical knowledge during the process.’

Because the city was the customer, it had to follow the formalized process for approval and contracting. Patlan, who heads the city's planning commission, had experience with previous municipal projects. He says eight proposals were received, and the city interviewed the top-five candidates. Kerman created a technical panel of engineers and officials from the water department with experience in public works to evaluate the proposals and select Borrego Solar as the winner.

Yep credits Patlan with developing a practical and economical plan for incorporating solar power into the city's infrastructure. Yep says the solar proposal received unanimous support from the five-member city council in both the concept and final approval stages.

‘The city council has four business owners," Yep says. ‘We crunched the numbers, and solar made a lot of business sense.’

Under the terms of the agreement, ConEdison owns and operates the solar plant. The city thus avoided paying for the facility up-front, but has an option to buy it in seven years.

Yep also notes the project was well situated from a siting standpoint. The city leased an almond orchard adjacent to the wastewater treatment plant to host the single-axis tracking ground-mounted array. The surrounding land was largely city-owned and includes a garbage disposal site. Solar fit right in.

‘There was not a lot of negative reaction from the people,’ he says. 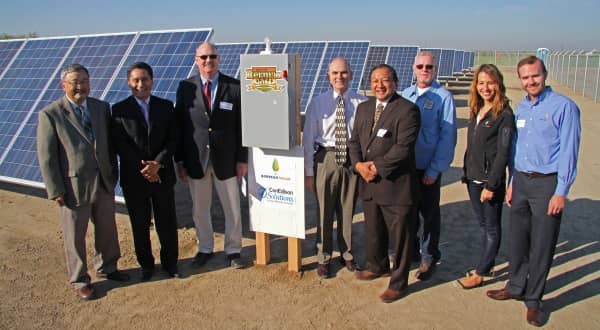