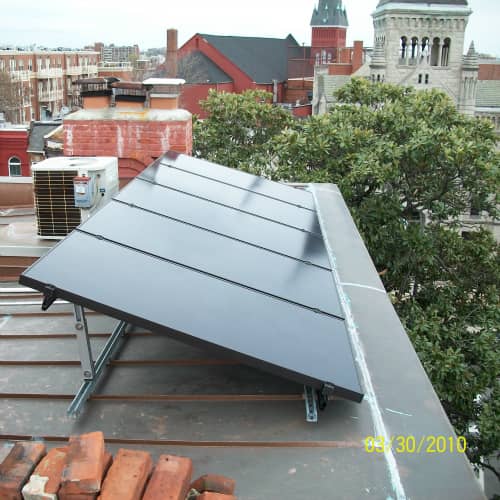 Solar panels are one of the most recognizable symbols of renewable energy. Arrays can serve as a form of green advertising and a source of pride for those who install them on their buildings. But what happens when solar installations and historical aesthetics collide?

‘With a city like New Orleans – or any old American city, like Boston or parts of New York, Charleston or Savannah – you'll run into entire neighborhoods that are protected by historic commissions,’ explains C. Tucker Crawford, CEO and co-founder of New Orleans-based South Coast Solar LLC.

At the federal level, the U.S. Department of the Interior's National Park Service (NPS) is responsible for preservation programs and activities, and administers the National Register of Historic Places. State historic preservation offices provide resources to communities at the state level.

Once a property is listed with the National Register of Historic Places, it becomes eligible for certain tax credits and grants. If a property owner does not adhere to specific rules, the status and incentives could be lost.

‘The main theme that I've gathered – in talking with Boston and other older towns with historic districts – is that you're looking for minimal visibility,’ Crawford says.

A building owner's best bet is to work with a solar installer who is well versed in historic guidelines, which vary by region. In general, installations are acceptable if they cannot be seen from the street, according to Tony Clifford, CEO of Washington, D.C.-based Standard Solar.

Clifford lives in Washington's Dupont Circle historic district and has experience installing solar on his own house.

‘My house, for example, is a row house built in the 1880s, so it has a flat roof and it's three stories up,’ he explains. ‘We had to go through the historic district.’

Clifford estimates that his company has installed solar arrays on up to 50 houses in historic districts in Maryland and Virginia.

‘We really haven't seen much of a problem,’ he notes. ‘You have to know what the rules are, and you have to get the permit in advance. You might upset a lot of people if you went out, did the installation and said, 'Oh, by the way, I did this.'’

Clifford says that because he lives in a historic district, he understands the importance of preservation.

‘Solar is good for the environment, and I think that historic districts should retain their historic look to the maximum extent possible,’ he says, adding that Standard Solar has never had to abandon a project because of the location's historical significance.

The rise in solar energy installations is relatively new – especially in Louisiana, where incentives were implemented in 2008. As a result, many are still grappling with the guidelines.

‘Because it was a new industry in our region, no one really knew what to do about it,’ Crawford explains. ‘We worked with the National Park Serviceâ�¦and the Historic District and Landmarks Commission – which is the city of New Orleans' local agency – and we helped establish guidelines.’

Crawford and Clifford do not believe that solar guidelines for historic districts are too onerous for installers. A typical New Orleans house, for example, has a required setback distance of about 10 feet from the front of the home's wall line to where a panel can be installed.

‘We've never been denied [an installation] on any major historic property unless it's the absolute most historic of our buildings,’ Crawford says, adding that a color-coded system that shows the historical significance of a building informs developers of which entities are most likely off-limits.

‘We just know not to go after those, and there are only a few of them,’ he says. ‘But for everything else, if we conform to that setback and it's mostly not visible, they just rubber-stamp it.’

Guidance
The National Trust for Historic Preservation (NTHP) is a nonprofit organization that works to save historic places in the U.S.

‘The National Trust has talked about doing everything we can to integrate solar panels in historic districts on historic properties in as sensitive a way as possible, because we recognize that solar can be a very crucial way of helping people reduce their carbon emissions,’ says Patrice Frey, the organization's director of sustainability.

On its website, the NTHP lists suggestions for people who want to install solar panels on historic buildings. The organization encourages cooperation among all parties involved in order to advance solar development while preserving the integrity of notable structures.

The NTHP's recommendations include the following:

In April 2011, the NPS released the ‘Illustrated Guidelines on Sustainability for Rehabilitating Historic Buildings.‘ The guidelines focus mostly on energy efficiency and building retrofits, but they also include recommendations for solar installations.

In addition, in September 2011, the U.S. Department of Energy's National Renewable Energy Laboratory (NREL), in conjunction with the NTHP, published ‘Implementing Solar PV Projects on Historic Buildings and in Historic Districts," which reiterated the NTHP's recommendations.

‘It looks just like a shingle, so then you can have something visible from the street,’ Clifford says. ‘But the challenge of that material, so far, has been that they're not much in terms of power output – the efficiency is very low.’

If a BIPV system is being installed on an existing roof, it has to be retrofitted, which increases the cost of the project, Crawford notes.

Regardless of the technology, the most important step solar installers can take when working on historic structures is to be prepared.

‘Do your research, and check with the National Park Service and their guidelines,’ says Crawford. ‘If your municipality doesn't have solar guidelines, help them write some.’