Home Solar News Policy Watch Can YOU Get The U.S. Presidential Candidates To Go Solar? 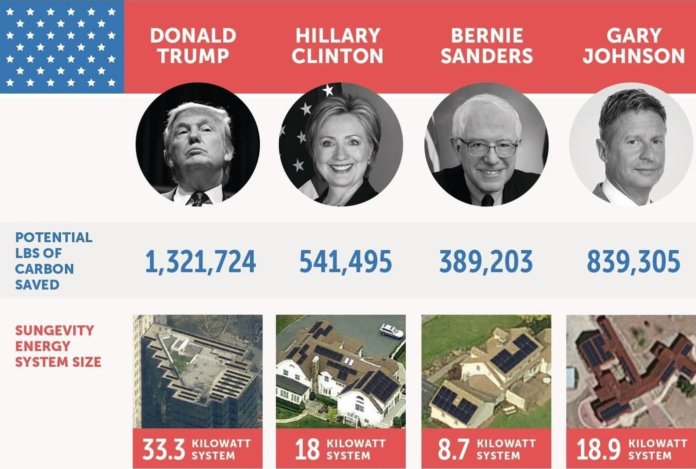 Sungevity Inc., which says its “Globama Campaign” helped get solar panels put on the White House in 2014, is at it again – this time challenging the 2016 presidential candidates to put solar panels on their homes.

The company says its new “Solar Throwdown” campaign hopes to shine a light on the economic and environmental benefits of going solar while urging each major candidate – Donald Trump, Hillary Clinton, Gary Johnson and Bernie Sanders – to set a leadership example when it comes to clean energy.

“The reality of solar is catching on, and very soon millions more U.S. homes will have a solar system. It’s better for the pocketbook, for the planet, for the economy, for security – it’s humanity’s next big step,” comments Danny Kennedy, Sungevity’s co-founder.

“We need elected leaders, solar advocates, activists, entrepreneurs and consumers to bring about this change right now,” says Kennedy. “American voters have the right to know which presidential candidate is truly committed to building a clean energy future.”

Sungevity used its proprietary remote solar design technology to develop a solar quote customized for the solar potential of each candidate’s home rooftop. The company says people can tweet directly to the candidates and urge them to go solar at blog.sungevity.com/solar-throwdown.