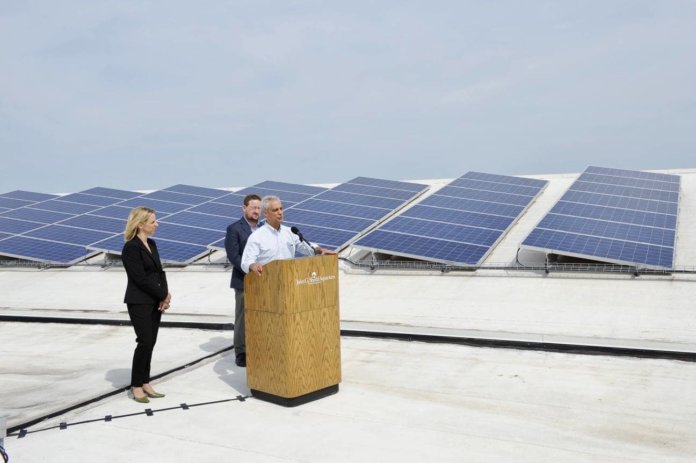 On Sunday, Chicago Mayor Rahm Emanuel announced a commitment to transition the city’s hundreds of municipal buildings to 100% renewable energy by 2025.

According to a press release from the mayor’s office, Chicago Public Schools (CPS) CEO Forest Claypool; Chicago Park District CEO Mike Kelly; Chicago Housing Authority (CHA) Eugene Jones Jr.; Fleet and Facility Management Commissioner David Reynolds; and City Colleges of Chicago (CCC) leadership have all signed on to the mayor’s new commitment. When the initiative is fully implemented, Chicago will be the largest major city in the country to have a 100% renewable energy supply for its public buildings.

“As the Trump administration pulls back on building a clean energy economy, Chicago is doubling down,” claims Emanuel in the release. “By committing the energy used to power our public buildings to wind and solar energy, we are sending a clear signal that we remain committed to building a 21st century economy here in Chicago.”

Collectively, the city government, CPS, the Park District, CHA and CCC used nearly 1.8 billion kWh of electricity in 2016, amounting to 8% of all electricity use in Chicago – the equivalent to powering approximately 295,000 Chicago homes. The electricity used by these agencies is the same amount of energy created by over 300 wind turbines in one year, according to the release.

The release says the commitment will be met through a combination of acquiring renewable energy credits, utility-supplied renewable energy via Illinois’ renewable portfolio standard, and on-site generation. Initial purchases will begin in 2018 and 2019.

“By moving boldly to repower its public buildings with renewable energy like wind and solar, Chicago is leading by example at a time when local leadership is more important than ever,” says Darin. “We look forward to working with the mayor, community leaders, and the people of Chicago to achieve this bold goal on the path to eventually powering all of Chicago with 100 percent clean energy.”

Emanuel announced Chicago’s new commitment on the rooftop of Shedd Aquarium, which has installed over 900 solar panels in an effort to reduce its energy use by 50% by 2020. As a member of the mayor’s Retrofit Chicago Energy Challenge, Shedd Aquarium has also retrofitted nearly 1,000 of its own light bulbs to LED and installed a 60,000-pound, 1 MW battery on its own property.

According to the release, the city government and its sister agencies have already made significant strides to green their energy supply. For example, a dozen CPS schools have had solar arrays installed since 2009, and the Park District and City Colleges currently procure large portions of their energy use from renewable sources.

Furthermore, Emanuel announced in January that Chicago has reduced its carbon emissions by 7% from 2010 to 2015. The reduction in greenhouse gases came at the same time Chicago saw a 25,000-person increase in its population and 12% growth in the region’s economy and jobs within the city.

Chicago joins a growing list of at least 25 U.S. cities that have made similar clean energy commitments. Most recently, the cities of Madison, Wis., and Abita Springs, La., established100% renewable energy goals.