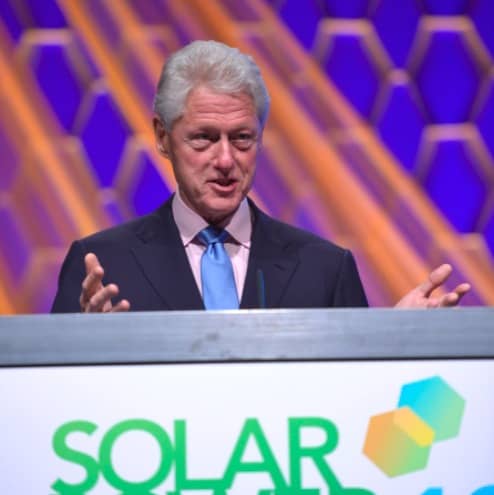 Solar Power International (SPI) attendees were treated to a high-profile pep talk from none other than a former U.S. president on Thursday.

Weaving encouraging words, insider policy advice and a couple of allegorical Arkansas anecdotes into his keynote address, President Bill Clinton reassured the industry crowd that solar power can, indeed, flourish in the U.S.

‘I love what you guys are doing,’ Clinton told the audience, which filled the Orange County Convention Center's large Valencia ballroom and spilled into two overflow viewing rooms. ‘This place is full of entrepreneurs.’

Unfortunately, he added, much of solar's recent success – and, especially, the vital role that the federal government has played in bolstering the industry – has gone unnoticed or been misconstrued by Americans outside the industry.

‘Most people don't know that in spite of economic adversity, government support and venture capital have catapulted the U.S. to lead clean energy investment in 2011,’ Clinton noted. ‘They don't know how much public-private cooperation there is.’

Solar power's perception gap – a challenge familiar to the industry – was a recurring theme in Clinton's speech, as he cited statistics about job creation, solar project deployment totals and other industry growth metrics, with each fact preceded by ‘most don't know thatâ�¦’

For instance, Germany recently generated the equivalent of 20 nuclear power plants with PV, despite the country's limited solar resource. Although opponents of Germany's solar program have claimed that the government ‘threw money at solar and practically bankrupted the country,’ hard numbers from apolitical sources have proven otherwise, he noted.

‘Go read the Deutsche Bank study,’ Clinton said, referring to an analysis that showed Germany has netted thousands of jobs from its solar initiative. ‘Not Greenpeace – Deutsche Bank.’

Similarly, here in the U.S., where incentives for solar power and other renewable energy have become an increasingly politicized issue, a study from the Baker Center (named for Republican Senator Howard H. Baker Jr.) found that government support given to renewables is perfectly in line with subsidies given to other industries, Clinton added.

‘Americans don't know that, but they need to know that,’ he stressed.

No solar company has been used as heavily in the political and public case against supporting solar as failed thin-film manufacturer Solyndra – which, according to critics, was a symbol of corruption and wasted taxpayer money spent on an undeserving industry. Clinton offered some tough love for solar professionals who wanted to reshape the nefarious Solyndra story told to Americans.

‘You can't blame people for reacting to an isolated incident out of context if you don't provide the context and the other side of the story,’ he pointed out.

Clinton added that he saw Solyndra as a company with an innovative yet expensive technology that failed to reach volume and bring its costs down quickly enough to compete – especially once the Chinese government doled out billions to their domestic solar manufacturing industry.

‘Since no one explained that to the American people, they can be forgiven for listening to the worst possible explanation,’ he said. He urged solar companies and their partners to ‘get the basic positive facts out there’ in order to counteract the negativity.

Anti-solar political attack ads laced with Solyndra references will fade after the November presidential election, but what about afterward? Solar Energy Industries Association (SEIA) President and CEO Rhone Resch told Clinton in a post-keynote Q&A session that SPI attendees were all eager to know the former president's thoughts on the fate of the solar sector under either a Mitt Romney presidency or a second term under President Barack Obama.

The two candidates often offer more clues into their plans than voters may realize, Clinton said. ‘My advice is that you should assume they will do what they say and attempt to know what they say,’ he suggested. ‘Politicians are much more honest with the voters than you think they are during campaigns.’

As for known specifics, Clinton added that Romney has said he would eliminate clean energy tax breaks, while Obama will likely seek to bring back the U.S. Department of the Treasury's Section 1603 program, which expired last year.

‘Around the world, no one makes energy policy without public-private cooperation,’ Clinton stressed. Nongovernmental organizations may also begin to play a larger role, especially in developing nations. For instance, houses being built as part of a post-earthquake redevelopment effort in Haiti – home to extremely high electricity rates – must now be equipped with PV-ready roofs.

Back in the U.S., numerous forces are in solar's favor – despite the aforementioned public-perception issues, Clinton said. For instance, California's aggressive 33% renewable portfolio standard, falling PV module prices, a growing interest among utilities in large-scale plants, and the widespread availability of state-level tax credits will all help solar reach what Clinton believes is an inevitable tipping point.

‘You're going to win this battle,’ Clinton assured the crowd. ‘The question is where and when and how.’

Photo provided with permission from SEIA and the Solar Electric Power Association.