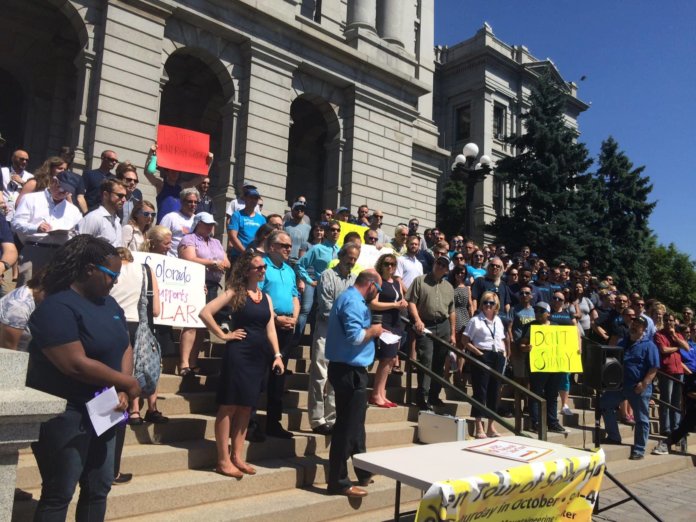 Editor’s note: This item has been updated to include comments from Xcel Energy.

On Thursday, dozens of Colorado solar energy workers, customers and advocates gathered on the steps of the Colorado State Capitol to show support for solar energy and voice opposition to a proposal from utility Xcel Energy.

According to a press release from The Alliance for Solar Choice (TASC), the event took place before the first Public Utilities Commission (PUC) hearing on Xcel’s proposal to restructure electricity rates, which some solar stakeholders claim will reduce consumer energy choice and put local jobs at risk.

“Right now, Colorado is a top ten state for solar jobs, and people are moving here specifically to work in the solar industry,” says Lauren Randall, senior manager of public policy for Sunrun. “Xcel’s confusing proposal would stifle that momentum.”

In an earlier announcement from the Colorado Solar Energy Industries Association (COSEIA), the group claims Xcel Energy has proposed increasing fixed charges for all customers while reducing charges on energy used. The group says that by reducing the portion of the electric bill consumers and small businesses can control through investments in renewable energy and conservation, Xcel is cutting financial incentives to invest. Xcel also plans to introduce demand charges for residential customers, which up until now, have only applied to large commercial and industrial customers, COSEIA adds.

“We believe public policies should encourage more distributed solar energy in order to provide customer choice, reduced air pollution and a more resilient electric grid,” comments Rebecca Cantwell, executive director of COSEIA. “We hope the PUC will decide Xcel’s proposals are moving us away from those goals and instead support innovative rate policies.”

TASC says that Colorado has positioned itself as a clean energy leader and innovation powerhouse in recent years. For example, last August, after nearly two years of discussions, the PUC decided to maintain the state’s solar net-metering policy. The group says solar supporters worry that Xcel is now looking for “a second bite at the apple” to eliminate rooftop solar competition.

Mark Stutz, an Xcel Energy spokesperson, says the utility is a supporter of solar in Colorado.

“We not only support but embrace all forms of solar, because our customers clearly want it as an option for meeting their energy need,” he comments.

Stutz says the utility currently has about 370 MW of solar power on its Colorado system, approximately 230 MW of which comes from rooftop installations. He also notes future plans, including about 170 MW of utility-scale solar set to come online through power purchase agreements over the next few years. The utility has also proposed more community, rooftop and large-scale solar, adds Stutz.

Regarding the utility’s controversial rate case proposal, he says, “It is our belief that as more customers generate their own power from rooftop solar installations, it needs to separate out distribution costs so the rate structure is more transparent and fair. We estimate that rooftop solar customers will be subsidized to a total of $17 million in 2016, and that number will only grow in future years.

“We have proposed a sliding-scale grid-use charge that will range from $2.62 a month for those using under 200 kWh a month to $44.79 for those consuming 1,401 kWh or more,” Stutz continues. “In return, Xcel Energy will lower the per-kilowatt-hour charge to 3.37 cents from 4.6 cents. In the summer, any electricity above 500 kW will be charged at 7.87 cents, under a tiered system allowed in a previous rate case. The changes are made to be essentially revenue neutral.”

He says about three out of five residential customers would see a bill increase – “although Xcel estimates the average residential bill will go up from $71.16 a month to $71.47 (there are other factors that affect the bills in our overall rate case).”

“The solar industry has argued that the proposed rate structure, by replacing variable charges with higher fixed costs, will make it more difficult to finance rooftop solar,” says Stutz. “We have countered that because customers with solar panels purchase less electricity but still require access to the grid, and because the grid-use charge is tiered based on how much electricity is consumed, solar customers will likely see the lowest charges. We believe most rooftop solar customers will fall into the two lowest tiers.”

In addition, he claims, “[T]he residential demand time-of-use issue that COSEIA references [above] as something for all customers is not quite an accurate representation. This is a voluntary option, a program for approximately 18,000 customers. It is not a requirement for all of our approximately 1.1 million residential customers.”

A similar hearing on Xcel’s rate case will take place on June 16, and COSEIA has again asked solar advocates to attend.