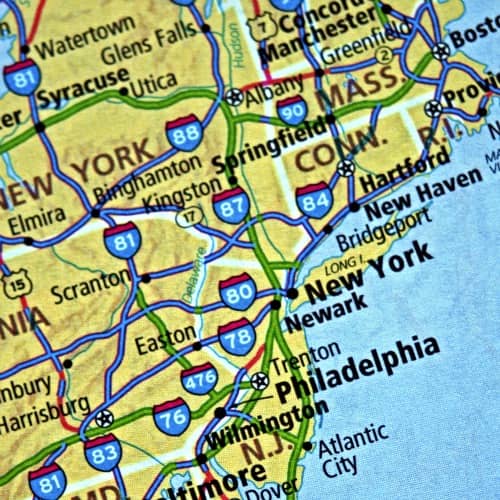 Many solar developers frustrated with the oversupplied, roller-coaster renewable energy credit (REC) market in New Jersey are beginning to take notice of a small – but blooming – solar market just to the north.

Connecticut has taken a different approach to its newly established REC market by conducting reverse auctions and offering project developers fixed-price, long-term contracts, and the early results are promising: Under the recently finalized first round of the REC program, a total of 87 solar projects across the state received contracts.

Created under the Energy Act of 2011, the state's Zero-Emissions Renewable Energy Credit and Low-Emissions Renewable Energy Credit (ZREC/LREC) program requires Connecticut Light and Power (CL&P), which serves over 1.2 million customers, and United Illuminating (UI), which serves approximately 325,000 customers, to seek out and purchase $12 million combined worth of RECs annually for six years.

In return, the utilities can use the RECs to meet Connecticut's 20% by 2020 renewable portfolio standard, and because the program is paid for with ratepayer dollars, the costs are recoverable.

Mitch Gross, a CL&P spokesperson, says the utility takes its responsibilities of administering the program very seriously. Meanwhile, Michael West, communications director for UI, notes that the utility considers the initiative ‘an opportunity to be on the front lines in developing Connecticut's energy future.’

As the RECs' titles suggest, the utilities have to buy ZRECs from zero-emission sources, including solar, and LRECs from low-emission sources, such as biomass and fuel cell projects. The program offers LREC contracts to projects with nameplate capacities ranging from 1 kW to 2,000 kW, while it offers ZREC contracts to projects in categories of Small (1-100 kW), Medium (101-249 kW) and Large (250-1,000 kW).

According to Alex Kragie, special assistant to the Connecticut Department of Energy and Environmental Protection commissioner, the ZREC/LREC program has two relatively unique features: reverse auctions and long-term contracts.

During the reverse auction process, UI and CL&P issue requests for proposals from project developers, and the utilities are mandated to select the lowest-possible bids and keep accepting them until the utilities spend all $12 million of the program's annual budget. The program uses the reverse auctions to encourage competition among stakeholders in the renewable energy industry, thus driving down the costs of clean electricity.

‘It's a way of rewarding companies that sharpen their pencils the best and don't feel the need to take high margins on their projects,’ explains Kragie. ‘At the end of the day, we're getting the biggest bang for the ratepayers' buck.’

The Small ZREC projects, however, are accepted on a first come, first serve basis, rather than through the reverse auction process, in order to ensure smaller developers can participate in the market.

The ZREC/LREC program also offers 15-year, fixed-price REC contracts to the winning bidders, and Kragie says the long-term deals give project developers price certainty and guaranteed revenue. In fact, West notes that out-of-state developers have shown a huge interest in the program because many other REC markets do not offer such contracts.

Survival of the cheapest
UI and CL&P issued the program's first requests for proposals in May. In late November, the Connecticut Public Utilities Regulatory Authority approved the utilities' final contracts for 87 solar projects (as well as 10 fuel cell projects).

Once constructed, the 97 projects will result in over 31 MW of new renewable energy in the state. The weighted average bid prices included $58.15/MWh for LRECs, $146.50/MWh for Medium ZRECs and $104.54/MWh for Large ZRECS – which resulted in an overall weighted average of $90.01/MWh for all of the bids.

And although the program was intended to boost the development of various types of renewable energy projects, bids for solar power and fuel cell projects were the only ones that made it into this year's round of REC contracts.

‘We structured the program so that it is technology-neutral, and we were not pre-judging who the winners and losers would be,’ explains Kragie. ‘As it turned out, the projects that could deliver the lowest-cost clean energy happened to be uniquely solar and fuel cell this year. There is nothing that prevents other technologies from playing a part in the program, as long as they deliver cheaper, cleaner energy.’

SunEdison, an active participant in the program's first round, bid in to both utilities' auctions with about two dozen solar projects ranging from 100 kW to 1 MW. Most of the arrays will be sited at commercial sites, such as at supermarkets and department stores.

Fred Zalcman, SunEdison's managing director of government affairs for the Eastern U.S., says Connecticut's model attracted the company to bid in to the program and that RECs, overall, can serve as a critical element for solar project development.

‘We enter into contracts with the host facility and, separately, enter into a contract with the utility to sell the utility the RECs,’ explains Zalcman. ‘That gives us two revenue streams and allows us to go out and finance projects, as well as to offer a lower power purchase agreement price to customers.’ In other words, he says, the incentive for the developer to build essentially acts as an incentive for the customer to buy.

According to Zalcman, Connecticut's approach to RECs will likely start gaining traction elsewhere, as other markets have suffered from harsh boom-and-bust cycles.

‘Connecticut is different from other REC-based programs,’ he says. ‘In some of the other markets, like New Jersey and Pennsylvania, you have massive oversupply of RECs, and RECs are trading at a price that really doesn't enable projects to go forward. In contrast, in Connecticut, there are a set amount of RECs available – a demand curve, if you will – and developers will be bidding the lowest-possible price they can while still being able to earn their required rate of return.’

For solar companies across the supply chain, cost reduction remains an important goal, no matter what incentive programs might be offered. Zalcman believes Connecticut's REC model represents an ideal transition to the inevitable incentive-free solar market.

‘We really like the reverse auction model because it imposes competitive discipline on market participants, which is where the industry needs to go,’ he explains. ‘We're not looking for incentives forever. The whole idea behind these programs is to drive development, scale, and cost reduction so that, eventually, the industry is self-sustaining without reliance on RECs.’