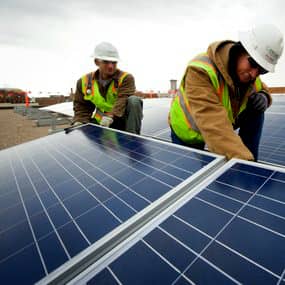 Worldwide solar photovoltaic market installations reached a record high of 27.4 GW in 2011 – up 40% year-over-year (Y/Y), according to a new report from NPD Solarbuzz.

Overall market growth in 2011 was boosted by strong second-half demand ahead of further deep cuts in solar incentives. This followed a period of over-production in the first half that triggered the sustained price decline through the PV chain that came to characterize 2011, NPD Solarbuzz says.

Overall, the PV industry generated $93 billion in global revenues in 2011 – up 12% Y/Y – while the industry successfully raised more than $8 billion in corporate equity and debt.

Of the more than 100 countries worldwide covered in the report, the top five PV markets were Germany, Italy, China, the U.S. and France, which collectively constituted 74% of global demand in 2011. China's solar demand soared 470% Y/Y, rising to third place from seventh in 2010.

European countries accounted for 18.7 GW – or 68% – of world demand in 2011, down from 82% in 2010. Strong growth in France and Italy, combined with a year-end surge in German demand that held it flat Y/Y, meant that Germany, Italy and France collectively accounted for 82% of the European market.

The top 10 polysilicon manufacturers, as ranked by NPD Solarbuzz, had 204,000 metric tons per annum of capacity (in total) in 2011, while the top 10 wafer manufacturers accounted for 20.7% of global capacity.

Over the next five years, factory-gate module prices will drop between 43% and 53% from 2011 levels, NPD Solarbuzz predicts. Average crystalline silicon module factory-gate prices in 2012 will be at least 29% lower than the 2011 average.

Over the next 12 months, European solar markets are projected to lose overall global market share, dropping to 53%. By 2016, European market share is projected to fall below 42% as North America and several Asian markets grow rapidly. China is forecast to reach 17% of the world market by 2016.

‘Aggressive cuts in incentives in Germany and other European countries have set up the potential for a global market decline in 2012, but ahead of these the rush to install is on, especially in Germany,’ says Craig Stevens, president of NPD Solarbuzz.

‘These cuts in tariffs will force companies to embrace self-sustaining marketing models earlier than they expected,’ he continues. ‘Meanwhile, Chinese policymakers will face a decision whether to stimulate their domestic market even more than planned to support their globally dominant manufacturing base.

‘Cutbacks in polysilicon, wafer and cell production plans before mid-year will be required to avoid further damaging margin declines,’ Stevens adds. ‘Meanwhile, it is significant that polysilicon manufacturing capacity – long the most constrained and profitable part of the PV chain – now has the highest capacity in the PV chain.’