Concentrating solar power (CSP) scored some significant wins in 2013 and 2014, contributing materially to the boom in utility-scale capacity in the U.S. At the same time, economics are seen as holding the technology back from its once highly regarded potential.

John O'Donnell, vice president of business development at GlassPoint Solar, a maker of CSP systems for the oil and gas industry, says that the costs of the technology relative to photovoltaic power, even for large-scale plants, continue to hamper its penetration for generating electricity.

‘When I was working in the solar industry a while ago, the interest in CSP as the foundation of a huge amount of solar power serving the grid was very strong,’ O'Donnell says. ‘Many people thought CSP technology was better for the grid because it is dispatchable, ran turbines for AC power and could provide energy storage. The huge price decline in photovoltaic power generation has caused a lot of challenges for CSP.’

A number of major companies exited the CSP arena, including Siemens and ABB, over concerns that the value proposition of CSP was unable to overcome its price differential with PV. ‘The low cost of PV today has closed a lot of markets to CSP,’ he says.

GlassPoint has developed a unique approach to CSP design that incorporates glasshouse enclosures and lightweight trough mirrors that focus on a fixed target. (For a more thorough description of the design and applications, click here.)

The plants serve industries that want steam for industrial purposes, such as enhanced oil recovery, rather than electricity generation. While this places GlassPoint in a niche market in the solar sector, the company conspicuously attracted $53 million from investors in 2014, making Mercom Capital Group's list as one of the largest venture capital deals of the year.

Nevertheless, O'Donnell says his firm has looked into the hybrid energy sector, where CSP is paired with a fossil fuel plant to serve the same turbines, but does not consider it a near-term opportunity. Certainly, the potential of such plants has been well established. Florida Power & Light's Martin hybrid parabolic trough and combined-cycle natural gas plant is a conspicuous, if lonely, example. The economics and complexities of such facilities have barred their widespread deployment.

O'Donnell says one of the challenges of the solar-hybrid approach is determining what portion of the total electricity can come from solar without redesigning everything else at the plant. Another challenge is making sure that when you add solar, you don't compromise the overall system's reliability or change its costs when it's running at night. ‘Sometimes, the design changes ripple through, and it becomes a complex engineering problem,’ he says.

O'Donnell says the focus on making the engineering cost less of a portion of the overall system cost is driving the economics of hybrid power generation – even more so than the fuel costs of the fossil-powered plant the CSP is paired with.

When every plant is a special snowflake, the engineering costs become an appreciable portion of the overall project. It becomes difficult to reduce the cost of the next one if each one is one of a kind. GlassPoint's approach has been to develop a standard 28 MW unit size – a standard block – and a standard process configuration.

‘To the greatest extent possible – we install a product, not a project,’ he says. 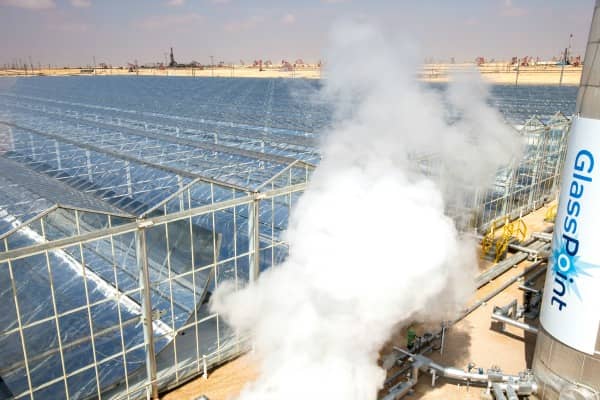