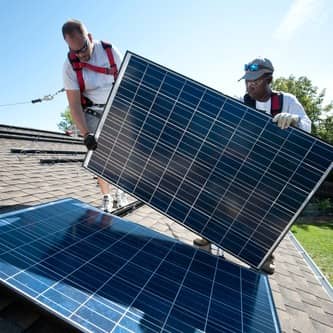 The National Solar Jobs Census, which was just released in its full form by The Solar Foundation (TSF), reveals positive growth once again in solar employment. Several of the business subsectors analyzed posted increases in their job numbers, and all indicators point to further good news in 2013.

Produced in collaboration with BW and Cornell University, TSF's census showed that the solar sector employs workers in all 50 U.S. states. From the array of (mostly) encouraging findings, here are some of the most important numbers:

Given the difficult overall economic conditions and patterns of employment, industry leadership figures expressed strong satisfaction with the findings.

‘These results are clear – the U.S. solar industry is strong and growing, and we are putting Americans back to work,’ said Rhone Resch, president and CEO of the Solar Energy Industries Association, in a statement.

‘The National Solar Jobs Census 2012 illustrates that the solar industry, as a whole, is a dependable job creator and that solar employers are confident about growth in 2013,’ added Andrea Luecke, executive director of TSF, in a statement. ‘

By comparison, the national average employment growth rate from last year to this year was just 2.3%, according to the report. Furthermore, during the three years for which TSF has conducted its Solar Jobs Census, industry employment has grown a full 27% – eight times faster than the broader economy, which posted job growth of 3.2%.

20,000: The approximate number of new solar workers projected to be added over the next 12 months.

The pace of job growth seen from 2011 to 2012 is expected to pick up even further over the next year. Based on its analysis, TSF predicts that solar-sector employment will increase by 17.2% over the next 12 months, netting approximately 20,000 additional workers.

More than 44% of the solar firms that participated in the census said they expect to expand during this time.

31%: The percentage of respondents who identified the decrease in system component prices as a positive factor for growth in the industry.

‘Such price declines, however, impact different industry subsectors in different ways,’ the report explains. ‘Some domestic manufacturers have found it difficult to keep up with the dramatically falling cost of solar components, leading some to scale back their operations or exit solar altogether.’

8,813: The number of solar installation companies in the U.S., according to the census.

These firms represent the largest employment subsector in the industry, giving a total of 57,177 solar workers their jobs. Additionally, installers added the most new jobs over the past year.

‘While the installation subsector is dominated by small firms, employment is growing most dramatically at known, larger firms, suggesting consolidation and maturation of the subsector,’ the report points out.

For the first time ever, this year's census revealed that the majority of installation firms participating now receive ‘all or most’ of their revenue from solar projects. Last year, just 39% of companies reported this status. According to TSF, this finding provides more evidence of consolidation in the installation segment.

29,742: The number of people in the U.S. working in solar manufacturing.

Given the well publicized struggles of U.S. solar manufacturers in the face of international competition and precipitous module price declines, it comes as no surprise the solar manufacturing industry saw a decline in job totals. Last year, this subsector employed 37,941 people.

However, this trend is expected to reverse itself as the sector recovers.

61%: The percentage of solar developers that expect to add workers next year.
This year's census breaks out ‘project development establishments’ in their own category for the first time. Currently totaling 414, these companies will expand their ranks in the coming year.

According to the report, the total number of employees at project developers will reach 9,108, with approximately 1,110 jobs expected to be added to the existing 7,998 positions.