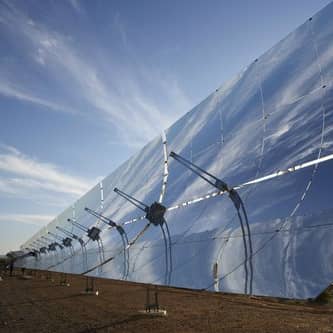 Large concentrating solar power (CSP) plants in the deserts of the U.S. Southwest have run into their fair share of obstacles lately, with project delays and financeability problems prompting some developers to convert high-profile in-progress projects to PV technology.

However, at least one CSP developer reports good news this week: Genesis Solar, a subsidiary of NextEra Energy Resources, has finalized $935 million in construction and term financing for its 205 MW CSP plant under development in Riverside County, Calif. Electricity from the project will be sold to Pacific Gas & Electric under a power purchase agreement signed in October 2009.

The centerpiece of the finance deal is an 80% loan guarantee that the U.S. Department of Energy (DOE) supplied to lender-applicant Credit Suisse via the DOE's Financial Institutes Partnership Program under the Energy Policy Act.

Proceeds from the DOE-backed financing are expected to be used primarily for the construction of the facility, according to law firm Hogan Lovells, which served as legal counsel to Genesis Solar during the deal.

Both the positive response of the private markets and the finalization of the loan guarantee can be viewed as a high-profile vote of confidence in CSP technology – particularly the parabolic-trough units that will be deployed at the Genesis project. In its announcement of the deal, the DOE notes that it is supporting a ‘proven and scalable â�¦ solar thermal technology that has been used commercially for more than two decades.’

Edith Webster, Hogan Lovells' lead partner on the Genesis deal, says that although reductions in PV module prices have increased the cost-competitiveness of large-scale PV, CSP remains financially attractive – despite the recent trend of technology switchovers at utility-scale projects.

‘I believe that the fundamentals, for a thermal project to remain financeable, remain the same as they have been historically: long-term contracted revenue stream with a creditworthy offtaker, land, permits, documented technical and technological feasibility, and construction risks addressed and allocated – whether to the engineering, procurement and construction contractor or via sponsor support, or a combination of both,’ she explains.

Unfortunately, those benchmarks of CSP project financeability may be raised if the project-development sector loses the DOE loan-guarantee program and is forced to rely on the private markets.

Like many industry participants, Webster holds little hope that the federal government will allow the program to continue beyond its rapidly approaching end date, Sept. 30.

‘Given the current budget-cutting mindset in Washington, I am not optimistic it will be extended,’ she says. ‘This is unfortunate, because it's a successful program and one that costs the taxpayers less than other stimulus programs.

‘The government doesn't pay unless there is a loan default, which is not highly likely, because the FIPP projects must have an investment-grade credit rating unenhanced – i.e., without regard to the DOE guarantee,’ she adds.