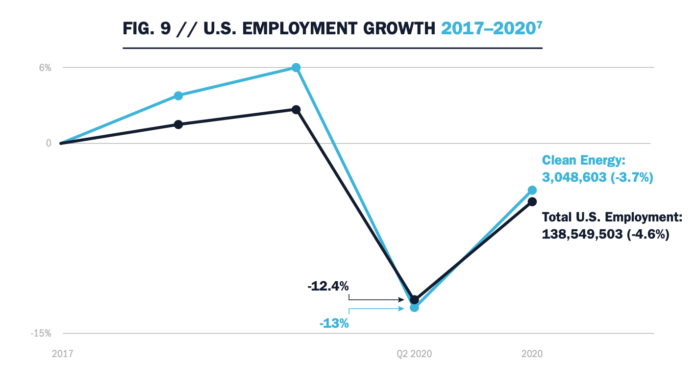 Clean energy jobs surged nearly 11% in the second half of 2020 to employ more than 3 million Americans across every state and nearly every county, according to the sixth annual Clean Jobs America report recently released by E2.

Like most of the economy, clean energy was hit hard by the COVID-19 pandemic and economic downturn in 2020. At one point, more than 600,000 clean energy workers had filed for unemployment, but the sector rebounded strongly after May to recover about half of those jobs to finish the year down 307,000 clean energy workers. The decline in total clean energy employment was the first recorded since E2 began producing its annual Clean Jobs America reports in 2016.

“Despite last year’s unprecedented decline, the data shows that clean energy is a job creator in every state and nearly every county in the U.S.,” says Bob Keefe, executive director of E2. “The message to members of Congress is that if you want these good-paying jobs in your backyard, you need to support the policies on the table that are primed to turbocharge clean energy and keep it growing.”

According to the analysis, energy efficiency jobs saw the biggest drop, declining about 11% over the year as workers were prevented from entering homes and offices because of the pandemic lockdowns. Still, energy efficiency accounts for an even greater share of U.S. construction jobs, employing about one in every five construction workers nationwide. Other clean energy sectors also saw significant declines in 2020 – including renewable energy (6%), grid and storage (7%) and clean fuels (7%).

Several clean energy sectors did see job gains in 2020, including wind energy which added about 2,000 jobs. But the brightest spot was in manufacturing of electric and plug-in hybrid vehicles, where about 12,200 jobs were added as an increasing number of automakers announced shifts to producing 100% zero-emission vehicles.

Despite the setbacks, clean energy jobs rebounded quicker than overall nationwide workforce, according to the analysis. Clean energy jobs grew about 11% since May, compared to less than 9% growth in the national workforce during the same period.