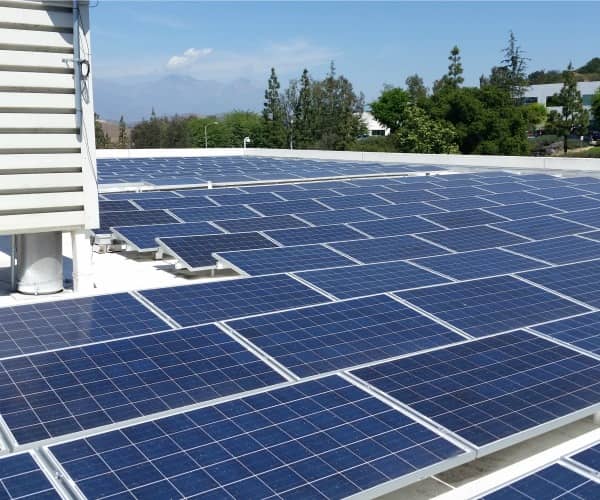 Martin Brix, director of commercial PV at ecoSolargy, says the first step in designing the project was to examine the VHA's energy usage data in addition to a few months of electric bills. The analysis encompassed how much electricity was used in 15-minute intervals over a year.

Brix says that such an analysis is particularly important for commercial projects because commercial billing is dependent on when the electricity was consumed. A demand factor is determined by the highest 15-minute usage for the month. All of this information goes into calculating an appropriate size for the PV system.

‘We are not necessarily trying to sell the largest system,’ Brix says. ‘We're trying to find that sweet spot for the customer.’

Southern California Edison's (SCE) time-of-use tariff has peak pricing for commercial customers at $0.30/kWh from 12 p.m. through 6 a.m. Mid-peak is $0.20/kWh, and off-peak is $0.10/kWh. Brix says part of the system design was to take advantage of the peak pricing. Overproducing in this period enables the customer to get a higher value credit back from SCE.

Once VHA selected ecoSolargy for the project, Brix says the next step was to perform a site survey to determine what sort of system it could support to help mitigate some of their costs. The headquarters building has an appropriate flat roof that enabled a south-facing array. There were air-conditioning units in the center of the roof surrounded by a fence that provided some shading concerns; however, Brix says the lack of other obstructions enabled them to lay out neat rows that avoided the shading problem.

Instead of one large inverter for the project, Brix says ecoSolargy elected to go with smaller string inverters from KACO new energy. The advantages for this installation is that a failure of one inverter does not affect the rest of the array and replacement of inverters only requires a two-person crew. Replacement of a string inverter does not require a crane and, thus, lead times for the job are a lot shorter.

VHA decided to install a white elastomeric coating on the roof. This provided added protection for the roof and made it cooler, which improves PV production. Brix says that from an engineering standpoint, ecoSolargy encourages their use. Project-wise, the decision added a couple of months' delay to the project.

An interesting aspect of the installation is that ecoSolargy is the manufacturer of the Orion solar modules used in the VHA installation. The company started as a manufacturer and has subsequently branched out into distribution and solar systems design.

‘It allows us to come in at a strong price without reducing any quality,’ Brix says.

The VHA array consists of 504 Orion panels and is expected to produce over 184 MWh of electricity per year. The customer in this case elected to own the installation outright to be able to take full advantage of the tax benefits.

Brix says that ecoSolargy has found that by specifying its own panels for projects it develops, the company is able to reduce the mark-up. He says it has benefits when going to customers with a willingness to stand behind its own product. The company turns to partners to perform the physical installation.

‘Our customers kept asking us for more and more,’ Brix says. ‘We started to bring in partners for racking and inverters. Eventually, we began providing design and engineering services. Whatever they wanted.’