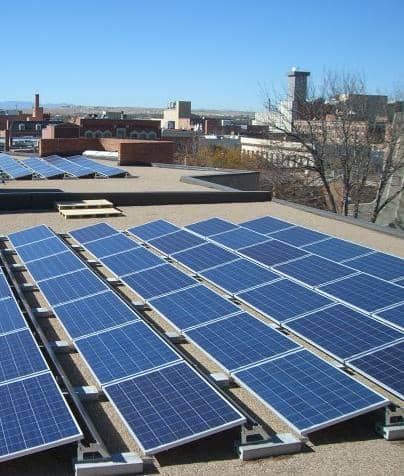 Optimism abounds at this year's Intersolar North America conference, and it's hard to find someone with a more positive outlook for the future of the solar energy industry than Eicke Weber, director of the Fraunhofer Institute for Solar Energy Systems.

A smaller-scale version of the initiative is already in the planning stages. Called DESERTEC, this energy-transport system aims to provide a sustained supply of renewable energy by connecting North Africa, the Middle East and Europe with a super grid of high-voltage direct-current cables.

According to Weber, such ambitious renewable energy goals will not be achieved by maintaining the status quo.

‘Business as usual is not an option,’ he stated. ‘We need a radical transformation of our energy system to the efficient use of renewable energies.’

Germany has already begun this transition by completely moving away from nuclear power – a decision made in the wake of the Fukushima disaster.

Therefore, Germany decided to not take the risk of endangering hundreds of millions of people. Eight of the nation's nuclear reactors were shut down immediately following the Japanese tragedy, and nine reactors will be phased out more gradually and be replaced with renewable energy.

Solar will certainly play a large role in the worldwide transition away from nuclear power and fossil fuels. Major cost reductions in photovoltaics – led by a drop in prices for crystalline silicon – have already led to exponential increases in solar deployment, Weber noted, indicating that current worldwide solar deployment levels were too high to fit on the graph in his presentation.

According to Weber's data, the worldwide PV market will reach 30 GW by 2014 and could potentially represent 100 GW by 2020. However, not all of this generation will come from large-scale solar farms. Rather, decentralized solar will be vital, because it does not require massive changes to the grid.

There also needs to be an effort to align solar supply with demand. Currently, the lion's share of PV supply is concentrated in China, while the demand primarily comes from Europe. To increase worldwide solar deployment, there must be a larger focus on urging Asian countries to deploy solar, as well as a push for manufacturing facilities in Europe and North America, Weber said.

China is positioning itself as a leader in photovoltaics, and Weber encouraged the U.S. to step up its game.

‘I challenge the United States to make sure to stay ahead of the Chinese PV market,’ he said.

Ultimately, Weber envisions that PV will represent 10% to 40% of the worldwide energy market, but achieving this goal will depend on a confluence of factors.

‘The driving force,’ he said, ‘is the combination of research, innovation and the right market.’