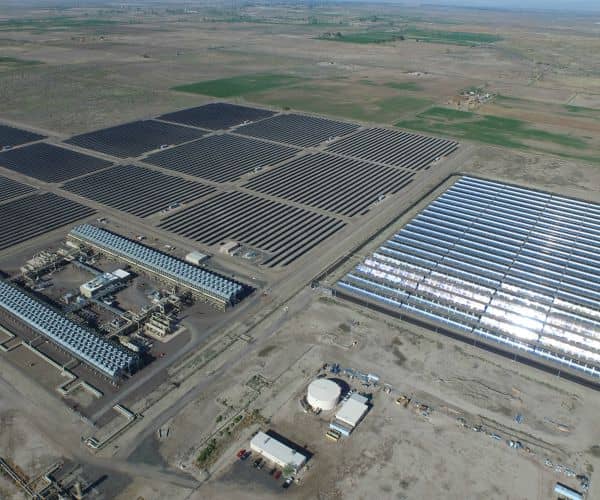 The company is hoping the hybrid power station will pave the way for more such projects in the future.

William Price, vice president of geothermal engineering and construction at EGP-NA, says the transformation of Stillwater into a hybrid power facility has nothing to do with output problems. The project is producing electricity for NV Energy under a power purchase agreement (PPA).

‘When we first looked at adding CSP to Stillwater, the idea was that we could greatly enhance its production profile, as well as offer an opportunity for risk mitigation,’ Price says.

The risk-mitigation factor comes from the nature of geothermal plant design and operation. Stillwater's geothermal component pumps heated geothermal fluid from a series of ground wells. The fluid is piped into heat exchangers that, in turn, heat a working fluid of isobutane to temperatures in excess of 370 degrees F. At this fairly low temperature by power plant standards, the working fluid flashes into vapor, which drives an expansion turbine.

Price explains that this technology requires tremendous capital investment, which is essentially front loaded. ‘When you drill those wells and build all that infrastructure, you are basically paying for the fuel source for the duration of the facility,’ he says.

Geothermal projects have a life expectancy of 20 to 30 years. During that time, Price says, there can be significant variation in the performance of individual wells. Temperatures and pressures may rise and fall. There is no guarantee that a particular well is going to be providing working fluid appropriate for the generation of electricity. The idea, then, is for CSP to be able to provide a temperature boost for underperforming sections of the overall system by adding heat where it is required.

According to Price, Stillwater was a good candidate for conversion into a hybrid facility because it had existing infrastructure in place. This was also a challenge because, as an operational facility, it had to meet its contractual obligations for generating electricity. From a practical standpoint, this meant that EGP-NA could not shut down the plant for an extended period of time to do a major retrofit.

‘Stillwater's Golden Rule is that the CSP integration cannot interfere with the geothermal production,’ Price says.

Again, the design of the geothermal system provided the means for adding the CSP portion. The various geothermal wells are grouped into branch connections that comprise the geothermal gathering system. The engineers deployed the CSP system to support a particular branch – the coolest one. While the integration work was in progress, the other branches remained unaffected.

‘The geothermal plant is a heat-conversion machine,’ Price says. ‘It doesn't care how this heat was produced. What we were able to do with the solar addition is give the facility more heat to make more electricity with.’

It is worth noting that Stillwater also hosts a 26 MW photovoltaic plant, although this does not have any physical impact on the thermal portions of the plant. Yet, a PPA is all about delivering electrons. It doesn't care how these electrons were produced.

Price says EGP-NA is well positioned to make hybrid energy plants practical because the company is agnostic about how renewable energy is produced. It has solar, wind, geothermal, hydro and biomass plants in its international portfolio. ‘We are able to understand the benefits of each and the weaknesses of each,’ he says. ‘Moreover, we understand the advantages of combining technologies for the better of the whole.’