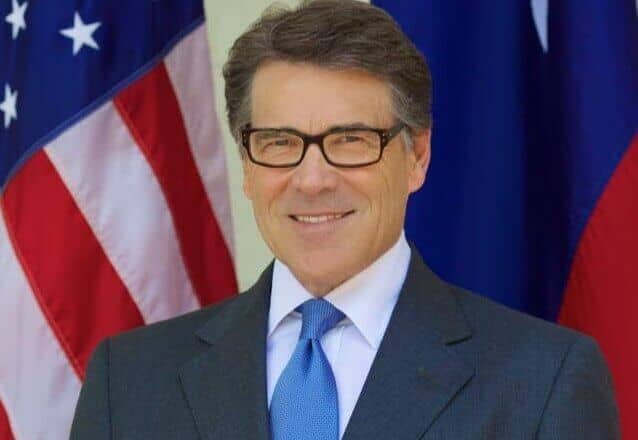 In a vote of 62-37, the U.S. Senate has confirmed former Texas Gov. Rick Perry as the 14th secretary of the U.S. Department of Energy (DOE). Perry succeeds Ernest Moniz, who was nominated as DOE secretary in 2013 under the Obama administration.

“It is an honor and privilege to serve as the secretary of the Department of Energy,” Perry says in a DOE press release. “As secretary, I will advocate and promote American energy in all forms. America has been blessed with vast natural resources and the technology to utilize them. I am committed to helping provide stable, reliable, affordable and secure sources of American energy. An American-first energy strategy is important to create jobs and grow the economy.”

As was the case when Perry was nominated in December, the appointment is facing both support and backlash from several environmental advocacy and clean energy groups, including the Sierra Club, whose executive director, Michael Brune, says Perry “promotes dirty fossil fuels rather than the advancing clean energy market, all the while ignoring the climate crisis.”

According to a December report from The Washington Post, Perry said in a 2011 presidential debate that he would get rid of three federal agencies, including the departments of education and commerce, but couldn’t remember the third one, which he later said was the DOE. After the debate, he reportedly told the media, “The bottom line is I may have forgotten energy, but I haven’t forgotten my conservative principles, and that’s what this campaign is really going to be about.”

In response, Brune says, “If the consequences weren’t so dire, it would be humorous that the Senate just confirmed Rick Perry to lead the Department of Energy – the agency he couldn’t recall by name when asserting he wanted to eliminate it.”

As for the American Wind Energy Association (AWEA), citing Texas’ thriving wind market, the group is voicing its support for the new DOE secretary.

“Secretary Perry’s leadership on wind energy infrastructure as governor of Texas helped attract tens of billions of dollars in private investment to rural communities and create over 25,000 wind jobs in the state,” says Tom Kiernan, CEO of AWEA.

“When he became governor in 2000, the state had less than 200 MW of wind power. When he left, there were over 14,000 MW, and there are over 20,000 MW today, after $32.7 billion of private investment. He created a pro-business environment and fostered that investment by supporting competitive markets and the Competitive Renewable Energy Zone transmission lines that tapped the low-cost wind power of West Texas,” he says.

“The Texas success story with wind power has now become a model for America,” Kiernan adds. “We were pleased to support Secretary Perry’s nomination, we congratulate him on his confirmation and we look forward to working with him at the Department of Energy to keep this success story going.”

“As governor of Texas, incoming Secretary Perry clearly showed that he has an appreciation for renewable energy and infrastructure,” states Abigail Ross Hopper, the recently named president and CEO of SEIA. “We look forward to working with him and his staff to implement policies and programs that take advantage of the job-creating, economy-boosting opportunities that solar energy presents to all of America’s communities. Last year, solar was the largest new source of electricity capacity and now provides 260,000 Americans well-paying jobs.”

U.S. Sen. Lisa Murkowski, R-Alaska, has also released a statement of support on the news. Murkowski is chairman of the Senate Committee on Energy and Natural Resources, which has jurisdiction over the DOE.

“This is a critical time for the department, and it needs steady leadership as we pursue the broad benefits of energy innovation and greater security for our nation’s energy infrastructure,” the senator says. “The department’s scientists and our national labs are vital to that effort, and I believe Gov. Perry will be a strong partner as we focus on everything from reducing rural energy costs to advancing the Alaska gasline project.”

On the other hand, Abigail Dillen – vice president of litigation for climate and energy at nonprofit environmental law organization Earthjustice – calls Perry a “former climate change denier who has received millions of dollars from the oil and gas industry.”

“In an administration where the oil and gas industry is at the tiller, it will be essential to hold Perry and the Department of Energy accountable for moving us forward with the renewable power and clean solutions that are actually creating jobs and reinvigorating our energy economy,” says Dillen, who adds that Earthjustice will use “the power of the law to force a shift from dirty to clean energy,” as well as “hold the Trump administration accountable for any and all setbacks to clean energy progress.”