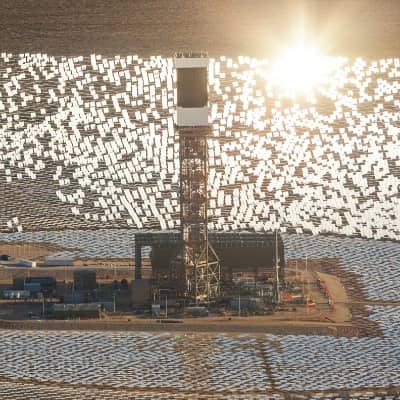 Like a massive, mirrored flower blooming in the Mojave, the 392 MW Ivanpah concentrating solar power (CSP) facility is nearly at its fullest extent. Nevertheless, the location of the Ivanpah project does not sit well with some environmental groups, notably the National Parks Conservation Association (NPCA), which has gone public with its displeasure.

According to CBS Los Angeles, the Washington, D.C.-based nonprofit organization saysÂ that while it supported the project in principle, it was critical of its placement in the environmentally sensitive Mojave Desert.

The Ivanpah Solar Electric Generating System, organized into three units, is claimed by its developers NRG Energy and BrightSource Energy to be the largest solar thermal system in the world. Nearing completion, any effort to nip the plant in the bud now might seem doomed to fail.

‘More than 153,990 of the project's total 173,500 heliostats have been installed to date,’ Jeff Holland, communications director for NRG Solar, a subsidiary of NRG Energy, tells Solar Industry. ‘Units 1 and 2 have had successful steam blows, and the project is currently about 92 percent complete. We're still tracking toward full operation in all three units by the end of the year.’

Yet, the timing of any static about the Ivanpah project could be troubling. In late June, K Road Power called an end to its effort to build a solar power facility in the Mojave. The Calico Solar Project had been bedeviled by lawsuits filed by a succession of environmental groups over the years. While a K Road Power spokesperson would only point to"changed market conditions," for its decision to terminate the project, those conditions by and large were products of opposition on environmental grounds.

Certainly, environmental resistance did literally take the steam out of the project. Calico was originally to be a CSP facility. K Road Power made a change to solar photovoltaic in hopes of reducing its environmental impact when it acquired the project in December 2010, ultimately to no avail.

As for Ivanpah, it appears to be full steam ahead. The U.S. Bureau of Land Management issued a decision in favor of the project in October 2010 following approval by the California Energy Commission that September.

‘I am not aware of any outstanding legal issues, and we are proceeding as planned,’ says NRG Solar's Holland.

If Ivanpah is successful, it could be a model for other massive solar projects on public lands. In a recent speech, President Barack Obama said he has directed the Department of the Interior to issue permits for an additional 10 GW of renewable energy on public lands by 2020. This is on top of the 10 GW of permitting that has been issued since 2012.

Rather than mounting a major challenge, the NPCA seems to be using the opportunity presented by Calico's fall and the president's call to raise awareness about the issue of siting large solar projects on public lands. David Lamfrom, NPCA's California desert senior program manager, says the problem is that government and industry planners did not take full account of what the costs would be in terms of damage to places that should be protected.

‘We obviously made a mistake here,’ Lamfrom says of Ivanpah, adding that large-scale renewable power plants should be sited on what he terms, ‘disturbed land’ – land that has already been used for some other purpose. He says his organization has identified 1.5 million acres of disturbed land in the California desert.

Bernadette Del Chiaro, the new executive director of the California Solar Energy Industries Association (CALSEIA), says that cooperation and goodwill between developers, utilities, government and environmental groups is essential for successful deployment of solar projects, which is in everybody's interests. While Del Chiaro stresses that CALSEIA does not have a position on the Ivanpah project specifically, she points out that the issue of siting solar projects will remain at the forefront.

NPCA's Lamfrom says that his organization considers itself on notice. He believes future large-scale solar projects are likely to receive much more scrutiny from communities, environmental organizations and regulators. On the other hand, he says there are other projects in the Ivanpah Valley and elsewhere planned for pristine desert locations that have been grandfathered in under existing procedures.

‘We haven't stood in the way of this particular project,’ he says of the CSP facility nearing completion. However, don't count on any others getting a free ride: ‘We may just have to say no.’

For more on siting issues and policies with regard to Ivanpah and large-scale solar project development in California, see the article in the current issue of Solar Industry.