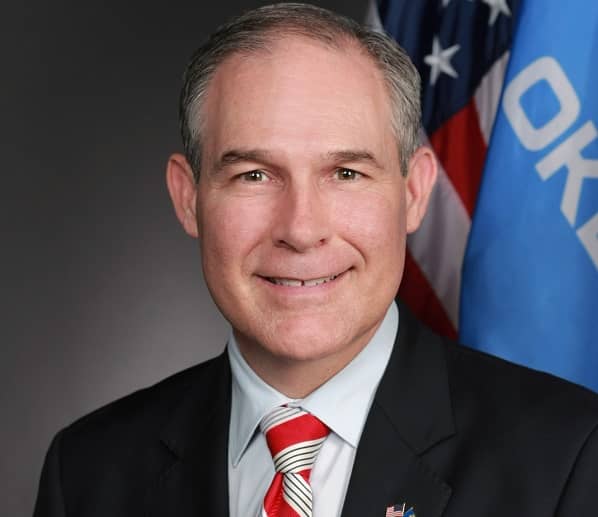 President-elect Donald Trump has chosen Scott Pruitt, who has served as Oklahoma’s attorney general since 2010, to be the next administrator of the U.S. Environmental Protection Agency (EPA). However, the decision has garnered backlash from myriad environmental groups.

According to his biography on the state of Oklahoma’s official website, Pruitt is a “leading advocate against the EPA’s activist agenda.” Before he was chosen as Oklahoma’s attorney general, Pruitt served for eight years in the state Senate, where he was a “voice for fiscal responsibility, religious freedom and pro-life issues,” the biography adds.

In 2015, Pruitt joined a multi-state lawsuit against the EPA in an ongoing effort to block the Clean Power Plan, the Obama administration’s landmark climate change initiative that establishes the first-ever regulations to cut carbon pollution from existing U.S. power plants. Earlier this year, he and another attorney general also penned an article in the National Review that stated the debate over global warming is “far from settled.”

In a press release, Michael Brune, executive director of the Sierra Club, says that Pruitt has “regularly conspired with the fossil-fuel industry to attack EPA protections.”

Calling the attorney general a “climate science denier,” Brune adds, “having Scott Pruitt in charge of the U.S. Environmental Protection Agency is like putting an arsonist in charge of fighting fires.”

“Americans need an EPA administrator who will fight to protect the air we breathe, the water we drink and the planet we love,” Alt says in a press release. “Scott Pruitt fails on all these accounts.”

Pruitt will succeed Gina McCarthy, who President Barack Obama named as EPA head in 2013. McCarthy had previously served as assistant administrator for the EPA’s Office of Air and Radiation and was an environmental official in Massachusetts and Connecticut, where she helped design programs to encourage renewables development and promote energy efficiency.

In response to his nomination, Pruitt states in a press release from the Trump admministration, “The American people are tired of seeing billions of dollars drained from our economy due to unnecessary EPA regulations, and I intend to run this agency in a way that fosters both responsible protection of the environment and freedom for American businesses.”

The release adds that Pruitt has been a “national leader against the EPA’s job-killing war on coal.” As Oklahoma’s attorney general, Pruitt established the state’s first “federalism unit to combat unwarranted regulation and overreach by the federal government.” Pruitt agrees with President-elect Trump that states should have the sovereignty to make many regulatory decisions for their own markets, the release explains.

Rhea Suh, president of the Natural Resources Defense Council, has also chimed in on the news: “The mission of the EPA and its administrator requires an absolute commitment to safeguard public health and protect our air, land, water and planet,” Suh says in a statement. “That’s the litmus test. By naming Pruitt, President-elect Trump has flunked.”

She adds, “The American people did not vote to return to the country to the dirty old days or to turn a blind eye on dangerous climate change.”

According to David Levine, CEO and co-founder of the American Sustainable Business Council, Trump’s decision demonstrates that he is “more concerned about the fossil fuel industry and other polluters than with growing the economy and creating U.S. jobs through investments in clean energy.”

“With Scott Pruitt’s selection as administrator, Trump lays out the welcome mat for polluters at EPA,” Levine warns.

In addition, he believes Trump’s decision “demonstrates a critical disregard for the impacts on businesses and the economy from climate change and extreme weather events.”

“Ultimately,” Levine adds, “we have grave concerns that the Trump administration will starve the agency of necessary resources to execute it core functions of protecting our air from climate change inducing carbon pollution, protecting clean water for food and agricultural production, and chemical safety for the products in our stores.”

On the other hand, U.S. Sen. Orrin Hatch, R-Utah, says he is “extraordinarily pleased” with Pruitt’s nomination.

“For years, Scott has been the go-to leader in resisting the Obama EPA’s regulatory overreach,” the senator says in a statement. “By standing up to unwarranted and unlawful policies, he has demonstrated rightful concern for Americans whose livelihoods and communities have suffered under intrusive, job-killing regulations. Under Scott’s leadership, I have confidence we can implement commonsense policies that protect both our environment and our economy.”

In addition, Gov. Mary Fallin, R-Okla., says in a press release that Pruitt is a “tireless advocate of the precious balance of power between state and federal governments.”

“In his nearly six years as attorney general, he led the charge to combat the ever-increasing overreach of the Obama administration. I applaud President-elect Trump’s appointment of Scott Pruitt as head of the EPA. He will ensure states retain their decision-making policies, instead of having them transferred to the federal government,” she says.

In a statement from Trump himself, the president-elect says, “For too long, the Environmental Protection Agency has spent taxpayer dollars on an out-of-control anti-energy agenda that has destroyed millions of jobs while also undermining our incredible farmers and many other businesses and industries at every turn.”

Now, he says, Pruitt will “reverse this trend and restore the EPA’s essential mission of keeping our air and our water clean and safe.”

“My administration strongly believes in environmental protection,” adds Trump, “and Scott Pruitt will be a powerful advocate for that mission while promoting jobs, safety and opportunity.”