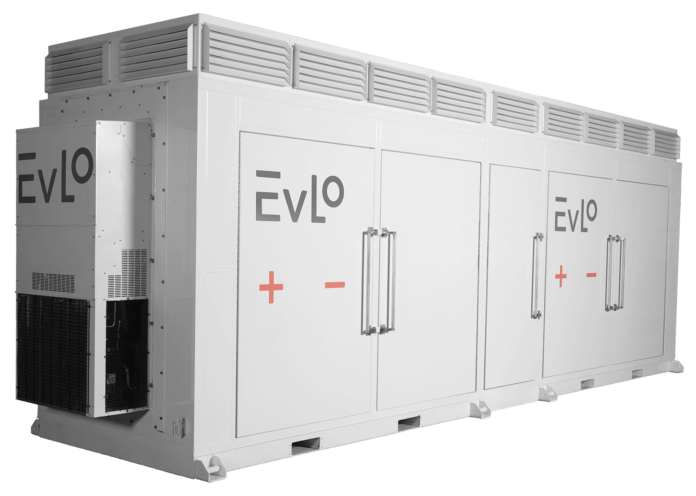 The system does not use cobalt or rare-earth elements. Its lifespan can reach 20 years, at the end of which its constituent elements are 99% recyclable. The EVLO 1000 system, which is 8.84 m long and 1.82 m wide, contains advanced safety systems and a powerful software solution enabling remote control and monitoring.

EVLO’s systems use patented lithium-iron-phosphate (LFP) batteries that offer better thermal and chemical stability than traditional batteries. The EVLO 1000 is fitted with over 200 sensors for real-time temperature monitoring, an ultrafast hydrogen-emissions detector and an active-ventilation system. Each system also has a dry-pipe sprinkler system. In addition, EVLO 1000 is ready for integration with utilities’ cybersecurity infrastructures.

“The launch of EVLO 1000 puts us in a favorable position in the energy storage market,” says Guillaume Hayet, president and CEO of EVLO Energy Storage. “With our storage systems’ cost, modularity and density, we can provide a made-to-measure response to our customers’ needs, while helping accelerate the energy transition with safe, powerful, sustainable systems.”

The first EVLO 1000 systems will be delivered in the coming months for work on a high-voltage transmission line in the Haute-Mauricie region in Canada. The energy storage system deployed will supply power to the region’s residential and business customers while the work is under way.

Meanwhile, EVLO product installations are advancing well at Gabrielle-Bodis solar generating station in La Prairie, and in France as part of the Tonnerre project carried out in collaboration with Innergex for French transmission-system operator Réseau de Transport d’Électricité.