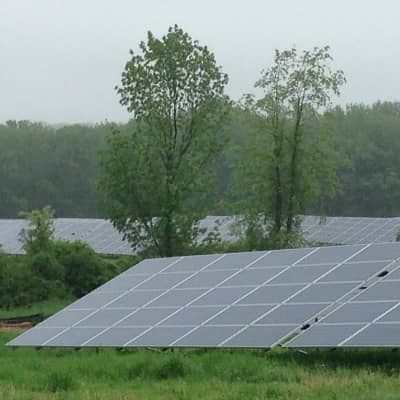 In May, First Wind began commercial operation of its first solar project – a 3 MW photovoltaic plant in Millbury, Mass. First Wind is also completing a 14 MW solar project in the nearby town of Warren, which is expected to enter service this month.

Construction on both the Millbury and Warren projects began in fall 2013 after a long-term power purchase agreement (PPA) was finalized with the University of Massachusetts (UMass). Under the terms of the PPA, UMass' Lowell campus and the UMass Medical School in Worcester will receive a majority of the financial incentives from both solar projects.

The successful entrance of the veteran wind developer, owner and operator into the solar sector represents the culmination of a strategy that began about two years ago, leading to the formation of the First Wind Solar Group to explore potential development opportunities across the company's current footprint in the Northeast, the West and Hawaii. Neil Kiely, director of New England development for First Wind Solar Group, says its first solar project project arose as an acquisition opportunity in its backyard of Massachusetts.

‘There were strong state policies for renewable energy credits in addition to net metering,’ Kiely says. ‘So this helped crystallize it for us: affording us the opportunity to accelerate our transition into solar by stepping into a project in mid-stream as an acquisition.’

In the Millbury case, the existing project already had town approval. The site was former farmland that had been cleared and converted to residential use. It was open and flat and nestled away from its neighbors. It was also close to transmission with low transmission upgrade costs.

‘Most importantly for us, it enjoyed tremendous community support,’ Kiely says.

A lack of community support can derail almost any project, but in Massachusetts, the strength of local governments makes this particularly important.

‘On the wind side, we tend to have statewide permitting – in the Northeast, at least,’ Kiely says. ‘But it's different with solar, where everything is local, essentially. You have a planning board, a select board, a conservation commission made up of town citizens. There was also an energy committee of citizens. We don't tend to see that layer of local control in other states.’

While First Wind was a local company, it actually had not developed any projects in the commonwealth – wind or solar. This was one of the reasons it established a partnership with Borrego Solar Systems, which is providing engineering, procurement and construction (EPC) services for the Millbury and Warren projects.

‘We came into this with a pretty good track record and a robust platform for developing, financing, constructing and operating wind power projects,’ Kiely says. ‘But we recognize the value of having a very experienced EPC partner for our introduction to solar. Borrego certainly has a track record and the bona fides in that regard. Also important that they were a Massachusetts-based EPC. Certainly the fact that they had development experience and capabilities was an added bonus.’

Millbury had a solar zoning code in place, and many of the preliminary issues had already been dealt with. However, when First Wind took over the project, some design and engineering changes were required. Working as a team, Borrego focused on revising engineering plans and taking the lead on working with the town planning board. First Wind worked on finalizing land issues, working with the select board and assessors. It also worked with the planning board on the decommissioning procedures.

Kiely says an important aspect of First Wind's solar strategy is the owner-operator philosophy it brings from its wind projects.

‘We are long-term owner-operators in the wind market, and we bring that same mentality to solar,’ Kiely says. ‘We know going into a community that we are going to be there for 20 to 30 years. But also in terms of the performance of the project, we don't have that short-term incentive to get something done and then hand it off to somebody else. We're building these things with the expectation that we're going to own it.’

In addition to its Massachusetts projects, First Wind is developing a utility-scale solar project in Hawaii and Utah. First Wind aims to supply Hawaiian Electric Co. with electricity from its planned 20 MW solar facility in Oahu under a 20-year PPA. This week, the company finalized seven 20-year PPAs with Rocky Mountain Power for the output of the planned 20 MW ‘Seven Sisters’ solar projects.