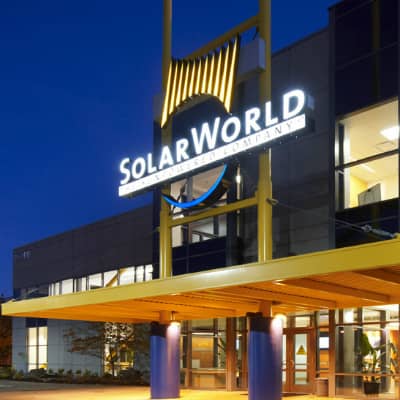 Less than a week after media reports surfaced that the German government was considering initiating anti-dumping proceedings against Chinese solar manufacturers, SolarWorld is once again leading efforts to seek tariffs on China.

According to a report from the Wall Street Journal, the Germany-based company filed a complaint with the European Commission and is seeking tariffs on Chinese solar modules imported into Europe.

Until now, the focus of the proceedings initiated by SolarWorld, whose U.S. subsidiary has a manufacturing facility in Oregon, had been on Chinese solar modules and cells imported into the U.S. The company alleged that illegally dumped Chinese solar products were harming the U.S. solar manufacturing industry – a claim the U.S. Department of Commerce (DOC) agreed with in its preliminary ruling on the case, issued in May.

Following the DOC's decision, many questioned whether Europe would initiate similar proceedings against China. However, a report from market research firm IHS iSuppli said it was unlikely that tariffs would be imposed in Europe.

‘EU laws set a higher standard than comparable laws from the United States before duties can be enforced,’ explained Glenn Gu, senior PV analyst at IHS." This means that Europe will be less inclined to actually slap on duties, and thus will not experience the same disruption in PV cell supplies expected in North America."

Responding to SolarWorld's latest filing, financial firm Jefferies said that although the global consequences of the European case are greater than for the one filed in the U.S., it would prove more difficult for SolarWorld to win.

"The implications of [European Union (EU)] dumping are much more serious than the U.S. case because of substantially higher volumes in Europe," the firm said in an emailed statement." However, the case is harder to win, given the EU rules around [World Trade Organization] lawâ�¦In our opinion, with the cased filed, the EU commission is likely to find reasons to hear the anti-dumping case.

"Although the duties might be smaller and the likelihood of EU [anti-dumping/countervailing duties is] somewhat lower than in the U.S. – since the EU system does not always require the imposition of duties where injurious dumping is found – the size of the European PV market would make it hard for Chinese cell suppliers to circumvent any duties using cells made outside China, given capacity constraints in Taiwan," Jefferies explained.

Although EU authorities have not yet taken action on the suit, SolarWorld's complaint – which, according to the WSJ, was confidential – is the first step in that process. SolarWorld has not confirmed or denied the reports.

Although the SolarWorld-led Coalition for American Solar Manufacturing (CASM) has not commented on the complaints reportedly filed with the European Commission, the Coalition for Affordable Solar Energy (CASE) – which has opposed the CASM's actions from the start – is already striking back.

"Germany-based SolarWorld has once again demonstrated that it is willing to undermine the world's solar industry in a desperate effort to avoid competition in the marketplace," the CASE said in a statement." Like a crazed agent provocateur, SolarWorld is fueling global solar industry infighting for its own selfish interest. On behalf of tens of thousands of U.S. solar workers, we are very disheartened by SolarWorld's unnecessary and destructive actions and urge the EU to reject their petition.

Chinese solar manufacturers are also speaking out against SolarWorld's most recent claims. Suntech – the world's largest solar module manufacturer – denies SolarWorld's allegations of dumping but said it would cooperate with an investigation. However, the company warned of the greater repercussions of the ongoing trade wars.

"We hope that the European Commission will recognize that any protectionist measures would harm the entire European solar industry and that a misguided trade war would undermine years of progress,’ Jerry Stokes, president of Suntech Europe, said in a statement. ‘Protectionist measures would increase the cost of solar energy in Europe and delay the transition from fossil fuels to renewable energy. Tariffs would also destroy thousands of jobs in the European solar industry.’