According to analysis from NPD Solarbuzz, ground-mount solar photovoltaic installations have outpaced building-mount installations in the U.S. by a significant margin over the last several years in all but a few quarters.

A key factor behind the growth of the ground-mount segment is the continued development of large-scale utility projects, NPD Solarbuzz says. Recent data in the company's U.S. deal tracker highlights a new trend where projects previously designed as building-mounts have shifted to ground-mounted carport structures. The continued attractiveness of these projects is expected to result in strong growth in the ground-mount segment through the rest of 2014, NPD Solarbuzz forecasts.

However, according to Michael Barker, senior analyst, risks remain in the U.S. market, particularly for the ground-mount segment. One of the main risks is increased installed system prices due to tariffs imposed on Chinese modules. Many of the large-scale ground-mount projects have bid power purchase agreement contracts at very aggressive rates, and are particularly susceptible to price pressure, Barker says. 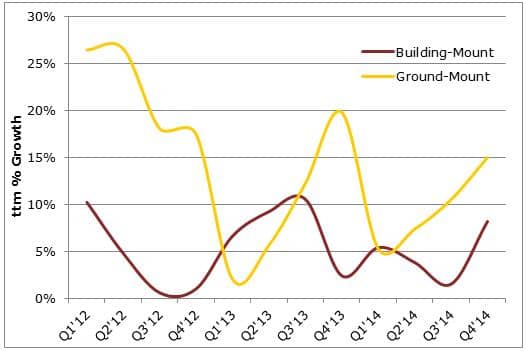