Hanergy Solar Group is providing photovoltaic charging stations for Tesla Motors in China. A total of four carports will be delivered to Tesla dealers in Beijing and Shanghai.

The Beijing carports use Hanergy's GSE flexible thin-film solar modules in a mobile configuration designed to be assembled and transported. The Shanghai carports will be a fixed structure, and adopts Hanergy's MiaSole copper indium gallium diselenide modules. Equipped with an energy storage system, the charging stations will be able to function at all hours.

Tesla and Hanergy say the solar charging stations are an important way to improve the environmental footprint of electric vehicles, many of which are recharged from electricity produced from coal-fired power plants. 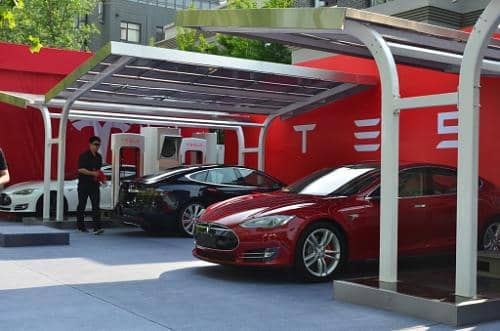