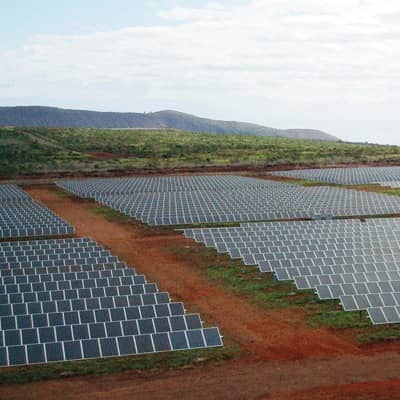 With rooftop solar now in use by more than 11% of its customers, HECO officials say the evolution of the energy market and the penetration of PV is moving the utilities toward a more multi-directional grid with increasing amounts of DG sources. Increasingly, grid-connected large-scale energy storage is seen as a key to managing this development.

HECO has narrowed the search for companies to provide up to 200 MW of energy storage for Oahu. More than 60 responses were received by the July deadline, responding to an April 2014 request for proposals. Three finalists have been selected, all of which have proposed battery-based solutions.

HECO is a composite of three utilities each serving different islands. Each island is a stand-alone, independent grid without the ability to import or export power as most mainland utilities have. Because of the small size and stand-alone nature of each grid, the impact on reliability when a problem occurs is potentially greater than in other places that are part of a much larger grid.

When output drops suddenly – due to weather changes or other causes – HECO says energy storage can help maintain reliable service and avoid customer outages. Large, utility-scale batteries will maintain power supply to customers as the utility brings fast-starting generators online and activates measures such as voluntary demand response by customers.

HECO has produced power supply improvement plans for each of its component utilities that are now under review by the Hawaii Public Utilities Commission (PUC). Under the plans, HECO estimates it can achieve a consolidated renewable portfolio standard of 67% by 2030, which is significantly in excess of the 40% required in statute. Â

‘In addition to other renewable energy sources, we will achieve this by adding significant utility-scale solar generation, plus nearly tripling the amount of distributed solar power on our systems,’ says Peter Rosegg, senior spokesperson at HECO. ‘This can be facilitated by replacing existing steam generators with faster-starting, quicker-ramping generation to provide the backup needed.’

Citing statistics from the Solar Electric Power Association (SEPA), Rosegg argues that HECO has been very supportive of PV, which he says remains a key part of meeting the utility's clean energy goals. All three utilities under the HECO banner rank in SEPA's top 10 for newly installed PV on a watts per customer basis. Hawaii has installed 9% of the nation's total PV despite having less than 1% of the country's utility customers.

‘The high adoption rate of PV in Hawaii is understandable, given generous state and federal tax credits and high electricity prices here – prices that have been driven up by dramatically higher oil prices in recent years,’ Rosegg says.

Prices for low-sulfur fuel oil in Hawaii shot up in 2011 after the tsunami and earthquake in Japan. The subsequent shutdown of nuclear plants and replacement in large part by plants running on low-sulfur fuel oil has caused prices in the Asia-Pacific market to skyrocket. HECO says renewable generation sources remain a centerpiece of its response to rising fossil fuel prices. In total, renewable energy has met more than 18% of the energy needs of HECO's customers in 2013.

Because Hawaii's economy has little manufacturing but depends on tourism, it has long had a late afternoon/early evening daily demand peak. According to Rosegg, what has changed is that the mid-day demand for electricity has dropped considerably as the amount of PV has increased. ‘This creates both opportunities for use of excess solar power generated during that time, such as electric vehicle charging, and operational challenges that we are working to address,’ he says.

The challenges of maintaining reliability during such situations are compounded by the fact much of the rooftop solar installed base is unmonitored and lacks grid- and self-protection features. With solar generation at its height from mid-day to early afternoon, having a large amount of unmonitored and uncontrollable rooftop solar – on Oahu, the capacity of installed rooftop solar exceeds the capacity of the largest power plant on the island – means it's much more difficult to maintain reliability when a system disturbance, such as the loss of a large generator or major transmission line, occurs.

HECO's policies to address what it says is the strain on the individual circuits from PV penetration is where it generates the most friction with solar installers. Critics of HECO's proposed package of power supply improvements in the solar sector protested the release of those plans, saying the measures would inevitably lead to the end of net-metering incentives and perhaps a significant number of installers would find themselves out of work.

Statements opposed to HECO's solar proposals have been flowing into the PUC during its public comment period. Rosegg counters that the unprecedented amount of variable rooftop solar on the island's small electric grids there are increasing challenges to maintaining reliable service for all customers. The ultimate concern is a growing risk of outages.

‘There are both circuit- and system-level issues,’ Rosegg says. ‘On a circuit level, we are concerned with safety and reliability issues – a growing number of circuits have rooftop solar with capacities exceeding 120 percent of daytime minimum load. From a system perspective, mid-day use of utility-provided electricity is now, at times, below the overnight lows of recent years.’

Rosegg says HECO engineers and grid planners are working with inverter manufacturers to evaluate the capabilities of various models and test new settings that can improve how PV systems interact with the grid during changing conditions on the grid. In addition, the utility is seeking to expand solar monitoring capabilities on neighborhood circuits to determine precisely how varying levels of solar affect system reliability and safety.

‘We are also implementing a smart grid program that is complemented by a distribution circuit monitoring program to provide us with a better ability to measure at the neighborhood circuit level actual conditions and the impact of distributed generation – such as PV – on those circuits,’ Rosegg says.

Perhaps most importantly, HECO is hoping its program to incorporate large-scale energy storage systems into the grid to store excess energy from renewables will provide a lasting solution to the problem of daytime overproduction and nighttime peak loads.

Ching says the utility hopes to sign contracts with all three of the finalists proposing battery-based storage systems. Projects must be reviewed and approved by the PUC, with input from the Hawaii Consumer Advocate. The goal is to file energy storage agreements with the PUC for review by early 2015 with systems in service early in 2017.