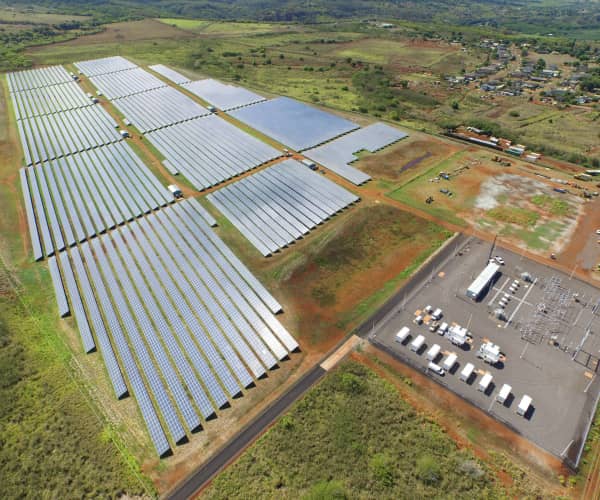 The 12 MW (AC) Anahola solar power facility REC Solar recently completed for the Kauai Island Utility Cooperative (KIUC) is currently Hawaii's largest operating photovoltaic plant and has pushed Kauai's solar capacity to 45 MW on an island that has a load of up to 65 MW.

The Koloa solar project, developed by SolarCity, is also producing about 12 MW. The Port Allen plant Alexander & Baldwin developed is producing 6 MW. There are another 15 MW of DG projects around the island.

‘That's pretty darn aggressive,’ says Drew Bradley, Hawaii regional manager for REC Solar. ‘It's admirable that KIUC has gone there because no other utility in the U.S. has done that. Hopefully, other co-ops and other utilities are paying attention about what can be done with solar generation.’

KIUC put out a request for proposals (RFP) for the Anahola project in late 2011, and 18 contractors responded. REC Solar had done a couple of smaller, distributed generation photovoltaic projects on the island with the utility before and ended up receiving the award.

Bradley says the constraints of the project posed significant engineering challenges. REC Solar, which has come to specialize in commercial and industrial PV projects, had never developed so large a facility. Significantly, the company had the responsibility of designing the new substation for the plant.

The storage requirements for the project were covered under a separate RFP, which was subsequently won by Saft. The REC Solar team proceeded with the requirement to make provisions for four 1,247 kV low-voltage bays for the 6 MW/4.63 MWh battery-based storage components to land in.

‘We used a specialty substation consultant to make sure we got that right,’ Bradley says. ‘But the balance-of-plant part of the project was right up our alley. We're pretty deep on the engineering side of things.’

REC Solar designed the system with redundant AC loop feeds. Each of the loops lands on the substation so that there is redundancy in both directions. The equipment on each one of the pads can be isolated, which enables crews to perform maintenance on the blocks individually without shutting down the whole facility.

The array itself consists of 57,624 modules on a ground-mount system with a 20 degree fixed tilt. The 60-acre site is at an elevation of approximately 800 feet – out of the tsunami zone – on the northeast side of the island. The land is owned by the Department of Hawaiian Home Lands. This imposed an extensive environmental assessment, which required over a year to complete. Although the site did not have any particular wildlife restrictions, soil runoff was a serious concern.

According to Bradley, there was a fair amount of grade to the site, so the builders had to install a series of three retention basins to capture all of the red dirt that would otherwise run off into the ocean. ‘Hawaii, in general, is extremely sensitive to runoff,’ he says. ‘The design involved quite a bit of civil engineering. It was a very tight site, and we wanted to use every last inch of it. It was definitely challenging to fit those retention basins in.’

Though the environmental concerns were chiefly related to topsoil, the engineering efforts were not. The soil concealed a fair number of very large boulders, so the refusal rate when driving piles could be as high as 10%. This meant REC Solar had to maintain parallel crews that would enable them to switch to grade-beam supports.

‘If you can't drive piles, you've got to go to a grade-beam design,’ Bradley says. ‘You have to be able to do this as you roll through the site so you don't block yourself out of the site where you need to go in and do the grade beams.’

In addition to other physical site requirements, the project called for highway access and a five-acre service yard for KIUC to use for its vehicles and equipment.

If KIUC has taken an aggressive posture with regard to solar, Bradley says to watch out for the utility to do more. ‘KIUC is saving $250,000 a month on fuel just because of the facility we just completed,’ he says.