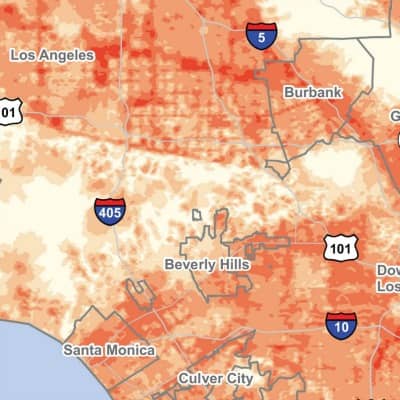 The EDF says it commissioned the Luskin Center to undertake the study as an effort to model the renewable energy potential in LA in the light of funding from recent legislation. The report profiles the potential for clean energy investments and identifies specific areas that could be eligible for funds due to special provisions, such as set-asides for disadvantaged communities.

The"Los Angeles Solar and Efficiency Report (LASER): Atlas of Investment Potential for Los Angeles County," is built around an atlas of maps representing the vulnerability of communities in LA County to the effects of climate change, as well as the potential for clean energy investments. The study is broken down by state senatorial districts and sub-regions across the county as a guide for legislators and other community stakeholders.

For each sub-region, the LASER provides maps depicting vulnerability to climate change, environmental health risk and potential solar capacity. Each map is accompanied by supporting statistics, as well as relevant state policies and initiatives. The solar potential maps, for example, are accompanied by funding opportunities stemming from legislation and utility programs specific to each area.

The report opens with warming projections for the LA region, 2041-60, that say temperatures are expected to rise by an average of 4-5 degrees F. Unlike many purely alarmist reports, a main purpose of the LASER is to present information for potential solar energy and green building project developers.

‘We want to pivot from vulnerability to investment opportunity,’ says Jorge Madrid, an EDF fellow and coordinator of partnerships and alliances. ‘Not only are we driving the deployment of clean energy, we're piloting new models to move public and private dollars into clean energy.’

The very specific geographic and policy focus on clean energy opportunities could make the atlas useful to developers as a practical tool for finding new business. According to the EDF, nearly 29,000 local jobs in solar panel installation could be created if 5% of the rooftop solar energy generating potential in LA County were realized. In addition, the atlas shows that nearly 1.5 million buildings in the county – about 80% – were built before energy efficiency codes went into effect and thus could be candidates for retrofit projects.

The EDF says it commissioned Luskin to produce the LASER atlas to provide a tool to help local decision-makers think strategically about investing state funding made available by recent legislation. In particular, 25% of the cap-and-trade proceeds from the California Global Warming Solutions Act are earmarked for clean energy investment. Proposition 39, the California Clean Energy Jobs Act, is expected to make billions of dollars available for expanding renewable energy generation and renovating buildings to make them energy efficient.

‘The cities most prepared to receive funding will probably get more of it,’ says Colleen Callahan, deputy director of the Luskin Center and project manager of the report. ‘The atlas highlights areas that could be prioritized.’

While the LASER report is focused like its namesake on LA County, its producers hope that it could serve as a model of highlighting clean energy investment opportunities in other communities.