The rising cost of energy has forced many manufacturers to focus their sights on innovative ways to optimize energy consumption and improve operational efficiency in their manufacturing, product lines, distribution and administrative operations. But despite the necessity for better energy management, most companies are still running their plants, warehouses and administrative offices from traditional energy sources that are non-renewable – and increasingly costly.

One equipment manufacturer that has made the move to renewable energy is OPEX Corp. The maker of high-speed mail handling, document management and warehouse automation systems has installed a 2.4 MW solar power system capable of producing more than 100% of the electricity needed to operate its 250,000 square-foot manufacturing, distribution and administrative complex located in Moorestown, N.J. OPEX is now a net-zero user of electricity.

Before switching its facilities to solar energy, OPEX had undertaken a number of initiatives to reduce its energy consumption and embrace sustainability.
{OPENADS=zone=72&float=right&margintop=10px&marginleft=10px}
‘We were spending a lot of money on electricity, and were constantly battling to reduce those costs,’ says Dave Andrews, facilities manager at OPEX. ‘We had installed energy-efficient fluorescent lighting throughout our entire 250,000 square-foot manufacturing and warehouse/distribution areas and in our administrative offices, and added motion-sensitive lighting in other areas. We also installed a computer-based programmable system for our 100-plus HVAC rooftop units to run on a more energy-efficient user-occupied basis. These changes produced significant savings.’

With measurable success in reducing its energy demand, by late 2009, OPEX began exploring solar energy as an option to further decrease its energy draw while expanding its sustainability influence. The company conducted a systematic analysis of the cost interdependencies and optimized energy benefits of converting to solar, taking into account the long-term business and sustainability goals of the company.

‘Admittedly, we did not know much about solar energy,’ Andrews says. ‘But this was a logical next step for us. As we started learning about it, the potential of putting solar into our operation began making good financial sense. The incentives looked really attractive, including a 30-percent rebate offered by the federal government at the time. We realized that it was something worth pursuing. By early 2010, we started the process of identifying several prospective installers and sent out requests for proposals.’

Optimizing solar energy
In mid-2010, OPEX selected H2 Contracting LLC of Marlton, N.J., to act as general contractor for the design and build of its solar energy project. H2, which provides construction management and general contracting with a focus on renewable energy and sustainability projects, investigated technologies, calculated costs and developed a schedule to phase in the introduction of the solar array.
{OPENADS=zone=72&margintop=10px&marginright=10px}
Going into the project, OPEX's traditional grid energy consumption for the Moorestown complex was 2.589 GWh of electricity per year. OPEX desired a solar energy capability that would cover 100% of the energy load. To meet these specifications, H2 designed a 2.4 MW solar power installation consisting of 8,372 250-W solar panels covering the roofs of two buildings, two parking pavilions on the headquarters campus and a three-acre ground-mount solar field array, for a total output of 2.772 GWh of electricity per year.

‘The solar system installed at OPEX is not a typical design,’ says Mark Heenan, president of H2. ‘Usually solar arrays are set up with all of the panels facing in the same direction and with the same tilt. With the OPEX system, because we mounted the panels on multiple rooftops, canopies and a field array, the 82,000 square feet of PV panels are situated in six different directions and with various tilts to better capitalize on available sunlight and space. We then integrated a Satcon Smart Combiner to optimize the flow of electricity.’

‘The combiner technology improves solar array monitoring and sensing, permitting all modules to transmit their recorded levels of sunlight regardless of whether the modules are in direct sunlight or in shade,’ Heenan says. ‘For OPEX, this has significantly optimized the performance of its solar energy capability.’

The solar energy produced is used directly in the company's manufacturing and distribution operations and administrative offices. When energy consumption exceeds that of the solar installation's production, the company supplements by drawing energy from the grid. Conversely, when the solar panels are producing more energy than what is needed for the operation of the facilities, the surplus energy is put back into the grid. OPEX also benefits from substantial solar renewable energy credits (SRECs), an added benefit of the solar system design. 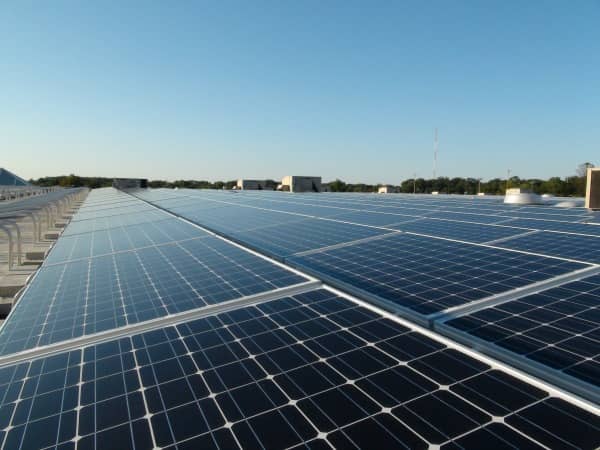 Completed in April 2012, the OPEX solar energy project was designed for an operational 25-year lifespan.

Solar part of a holistic approach
OPEX continually looks at designs and concepts that will make its facilities more efficient and reduce their impact on the environment. Within the company's parking pavilions, for example, OPEX provides electric charging stations for employees who drive electric vehicles and wish to access complimentary electricity – also generated from the sun.

‘We work diligently to reduce energy consumption and integrate sustainable procedures in our products, processes and facilities,’ says James Liebler, vice president of corporate and legal affairs at OPEX.

All scrap materials and oils used in manufacturing, and paper products in the company's administrative offices, are recycled. OPEX dug its own 175-foot well to irrigate its eight acres of open land on its campus – which it replanted with native fescue grass, requiring less water. Rainwater runoff from the company's 22 acres of roofing and parking areas is funneled into the open ground to percolate into the aquifer.

‘Not only are our production and administrative facilities operating with net-zero energy from the grid, but our full line of automated material handling systems is now being manufactured using 100-percent solar energy,’ Liebler says.

For more information on OPEX's solar installation and other sustainability efforts, click here.