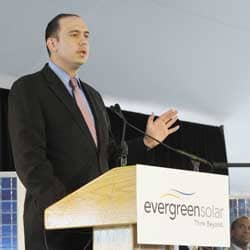 Last week's announcement from Evergreen Solar that the company would close its PV module factory in Devens, Mass., sent an immediate wave of disappointment, criticism and even outrage through the solar sector and far beyond.

Citing an inability to compete with Chinese operations, the Marlborough, Mass.-based manufacturer – which touts its proprietary String Ribbon technology as more cost-effective than traditional crystalline-silicon structures – said its Devens facility would be closed by the end of the first quarter.

As U.S.-based solar equipment factories continue to face increasingly stiff competition from China and other low-cost locales, states across the country may see this factory closure as a painful lesson and begin rethinking their own methodologies in doling out incentives.

Once heralded as a leader of the U.S.' emergent clean energy economy, Evergreen Solar – along with government officials in Massachusetts – has become a textbook-ready example of massive tax-revenue waste, critics have claimed. Financial support provided to the company from Massachusetts agencies included $23 million in grants, up to $17.5 million in low-interest loans and a low-cost 30-year lease on state-owned property.

The manufacturer expanded its Devens factory in 2008, promising to bring its total of Massachusetts-based employees to 1,000 by the end of 2009. ‘Evergreen Solar is at the leading edge of our clean energy economy in Massachusetts,’ then-governor Deval Patrack, D-Mass., stated during a ceremony announcing the expansion.

However, during the course of 2009, it was China – not Massachusetts – that played a major role in Evergreen Solar's next round of expansion announcements. In early May, the company entered into a framework agreement with Jiawei Solar Co. for a major ramp-up in String Ribbon wafer manufacturing in Wuhan, China.

Seven months later, Richard M. Feldt – who was then the company's chairman, CEO and president – announced that declining module prices were ‘making it very difficult for manufacturers located in high-cost regions to remain cost-competitive.’ As a result, another manufacturing step – module assembly – was shifted to Jiawei's campus in Wuhan, China.

Given the none-too-sudden trajectory of Evergreen Solar's manufacturing move to China, Massachusetts' oversight – or lack thereof – of its investment has been pointedly called into question.

As company executives and Massachusetts agencies squabble over what percentage of its financial incentive package Evergreen Solar will be required to repay in the wake of its factory closure, some policymakers are advocating stronger measures to prevent such situations in the first place.

State Sen. Jamie Eldridge, who represents Massachusetts' Middlesex and Worcester district, called Evergreen's exodus ‘yet another sign that it's time for Governor Patrick and the legislature to take a hard look at Massachusetts' current job-creation strategy of giving large tax breaks to big corporations.’

‘At a bare minimum, we ought to ensure that every economic development deal our government makes includes a strong clawback provision,’ Eldridge wrote in his official blog. ‘Although there were some clawback provisions in the Evergreen Solar deal, they weren't strong enough – and as a result, it seems we'll be getting very little of our initial investment back.’

Consequently, Eldridge said he plans to re-file incentive-accountability legislation he introduced during the 2009-2010 legislative session.

‘If we are looking to increase the efficiency of the state's economic development agencies, then we need to be collecting the performance management data that will allow us to make informed decisions and ensure that our economic development dollars [are] being spent as efficiently as possible,’ the bill states. ‘Quite simply, you can't manage what you can't measure.’

Specific transparency requirements introduced in the bill would mandate that the Massachusetts Department of Revenue produce an annual unified economic development budget ‘detailing tax reductions, tax credits and subsidies for economic development, [and] including all line item expenditures for any state-funded entity, including quasi-public authorities.’

‘The Commonwealth of Massachusetts invested almost $60 million in state grants, tax breaks and subsidized loans in Evergreen Solar to create approximately 800 jobs, translating into about $75,000 in taxpayer dollars being spent for every job,’ Eldridge wrote. ‘And of course, now even those 800 jobs are gone, and we aren't getting our $60 million back.’

These measures would simply make Massachusetts' financial-incentive policy more aligned with that of its neighbors, according to the bill. But against the current backdrop of taxpayer outrage at states' funding corporate incentives, this local legislator's efforts to introduce more stringent oversight of tax breaks and grants offered to solar manufacturers may very well be an early sign of a larger national trend with potentially significant implications for U.S. solar module factories.