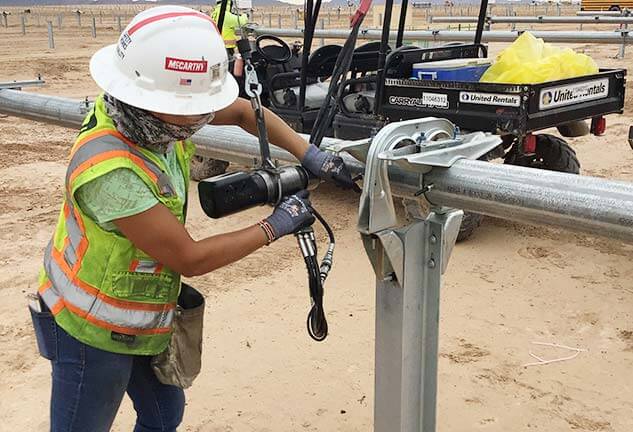 McCarthy, a privately held national construction company, has been selected by Lightsource bp as the engineering, procurement and construction (EPC) contractor for two utility-scale solar farms in Texas.

McCarthy is responsible for the design, procurement, construction and commissioning of the facilities. The 163 MW Elm Branch Solar Farm is located approximately 40 miles south of Dallas in Ennis, Texas, and the 153 MW Briar Creek Solar Farm located 60 miles south of Dallas in Corsicana, Texas. Construction of the two projects recently began and is slated to complete in September with commercial operations of both solar farms expected by late Q4. With more than 360,000 solar panels installed on approximately 1,350 acres of land, the Elm Branch Solar Farm is expected to generate 272,000 MWh of solar power annually.

McCarthy’s Renewable Energy and Storage team plans to hire approximately 500 craft workers to construct the two projects – the majority of whom are being recruited from the local region and the military veteran community, as part of its new veteran recruitment program – and will train laborers seeking utility-scale solar construction experience.

“We are grateful to be part of bringing clean energy and jobs to these Texas communities,” says Scott Canada, executive vice president of McCarthy’s Renewable Energy and Storage team. “With utility-scale solar construction jobs on the rise in Texas and around the country, we are continually working to help local skilled craft workers, veterans and those displaced from jobs in other sectors to join our solar project teams and receive the training needed to develop rewarding careers in the growing renewable energy sector.”

Lightsource bp is developing financing, owning and operating the Elm Branch and Briar Creek facilities. The two projects combined are an investment of $380 million in new local energy infrastructure for Texas. The projects will also deliver local economic benefits beyond clean and economical electricity for the greater Dallas Fort Worth area.

Since 2010, McCarthy’s Renewable Energy and Storage team has completed more than 50 utility-scale clean energy projects in communities across the country, delivering a combined capacity of more than 4.9 GW of energy production and over 340 MW/770 MWh of energy storage. Nationally, McCarthy says it provides EPC services on utility-scale solar projects for private solar developers and utilities, helping them deliver cost-effective clean to the communities they serve.