Total global corporate funding in the solar sector came in at $6.3 billion during the second quarter of this year (Q2'14), compared to $7 billion in Q1'14, according to a new report from Mercom Capital Group. That includes venture capital (VC), private equity (PE), debt financing, and public market financing raised by public companies. The report notes that the second quarter also saw two initial public offerings, including one yieldco and a securitization deal.

‘It was a solid quarter for the solar sector in terms of fundraising," comments Raj Prabhu, CEO of Mercom Capital Group." VC funding was up, public markets remained strong, and we are seeing new and innovative financial structures. Residential/commercial solar funds continue to raise record amounts."

The report says global VC funding, including PE and corporate VC, in Q2'14 totaled $432 million in 21 deals, up from $251 million in 26 deals in Q1'14, mostly due to three large deals. Solar downstream companies attracted most of the VC funding in the quarter, with $388 million in 10 deals. 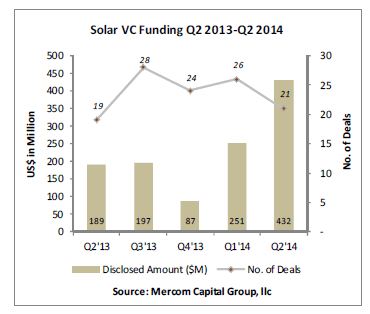 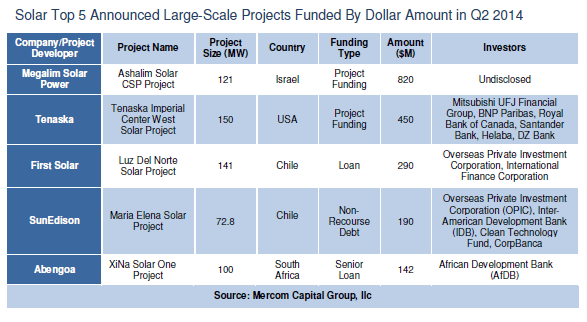 The report says there were 25 corporate mergers and acquisitions (M&A) transactions in the solar sector in Q2'14, down from 38 transactions in Q1'14. Solar downstream companies were involved in most of the M&A transactions.

According to the report, the largest disclosed M&A transaction by dollar amount was the $350 million acquisition of Silevo, a solar cell and PV module manufacturer, by SolarCity. This was followed by the $29 million acquisition of Zhejiang Ruixu Investment Co., a solar project development company and wholly owned unit of ReneSola, by Jiangsu Akcome Solar Science & Technology Co.

Rounding out the Top 5 was the $2.2 million acquisition by Jinzhou Yangguang Energy, a wholly owned unit of Solargiga Energy, of an additional 10% stake in PV module manufacturer Jinzhou Jinmao Photovoltaic Technology from Kinmac Holding, raising its stake to 96%.

This was followed by the sale of the 19.5 MW Great Glemham solar project in Suffolk, U.K., by BayWa to Allianz Renewable Energy Fund, an Allianz Capital Partners fund, for $35.7 million. Bluefield Solar Income Fund, an investment company focusing on large-scale agricultural and industrial solar assets, acquired the 17.5 MW Hertfordshire solar projects from Solarcentury for $32.5 million, and ContourGlobal, an independent power producer, acquired a 5 MW solar portfolio in Italy from Sorgenia Solar for $27.5 million.

Rounding out the Top 5 was another transaction from Foresight Solar Fund Ltd., which acquired the 12.2 MW Highfields solar project in Essex, U.K., for $26.3 million from SunEdison. 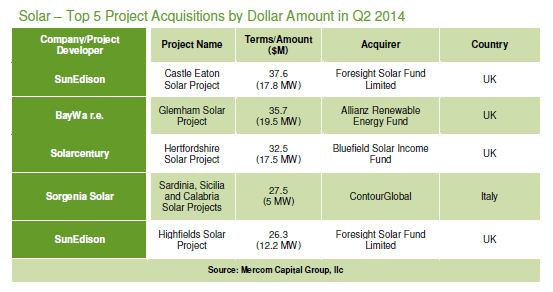