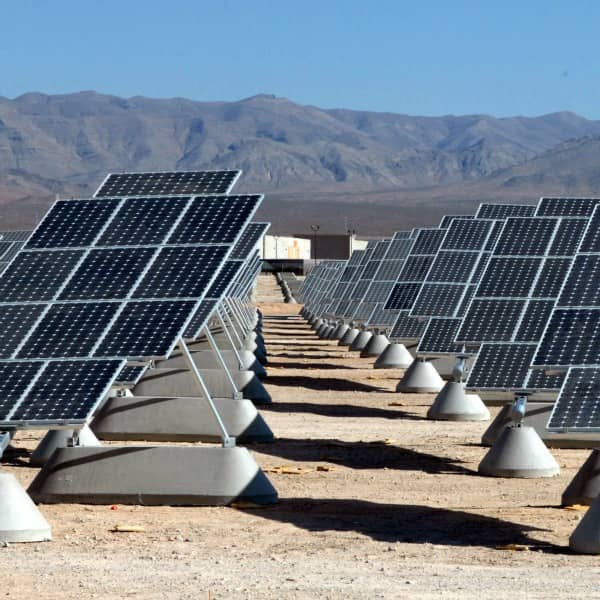 The huge solar project potential for federally owned lands in the U.S. – especially in the sunny Southwest – is well known. However, as project developers have found, regulatory red tape and lengthy approval timelines can make working in these areas difficult, and some prime locations remain off-limits.

A new team effort from the U.S. Department of the Interior (DOI) and the Department of Defense (DOD) could help turn some of that solar potential into reality by unlocking millions of acres of land.

On Tuesday, Interior Secretary Ken Salazar and Defense Secretary Leon Panetta announced an agreement intended to spur the development of solar projects and other renewable energy projects on public lands that had been withdrawn for defense-related purposes.

Salazar and Panetta's respective departments plan to ‘harness the significant proven solar, wind, geothermal and biomass energy resources on or near DOD installations across the country,’ the secretaries stated in a press release.

Why the need for this type of DOI-DOD partnership? For one thing, as the agencies' memorandum of understanding (MOU) explains, the land ownership structures for many potential solar project development spots can be complex.

The DOD's existing installations – totaling approximately 28 million acres – comprise both fee-owned lands (which fall under the Federal Property and Administrative Services Act) and withdrawn lands. The two types of land may be interspersed in some renewable energy development locations, the MOU explains. The Interagency Land Use Coordinating Committee handles development issues on withdrawn lands, while the DOI's Bureau of Land Management (BLM) deals with other lands near military installations.

The MOU, therefore, lays out the roles and responsibilities of the DOI and DOD for these lands, with the goal of speeding up project development.

Pilot projects
According to a study released earlier this year by the DOD, more than 7 GW of solar project development alone is ‘technically feasible and financially viable’ on DOD landholdings in the Mojave and Colorado deserts in the U.S. Southwest.

Although any developers venturing onto military lands must proceed with the utmost sensitivity to missions and other security concerns when installing PV modules or concentrating solar power dishes, the report also stressed that the payoff to both developers and the federal government once such projects are completed would be substantial.

(For the story behind one successful solar project installed on-site at an active military facility, see ‘Lessons From Edwards Air Force Base's 3.4 MW Solar Installation’ in this month's issue of Solar Industry.)

In their MOU, the DOI and DOD identify several specific spots for solar project authorization that were presumably selected for their compatibility with solar installations, as detailed in the DOD's earlier report. The sites include the Air Force's Barry M. Goldwater Range East in southwest Arizona; the Marine Corps' Barry M. Goldwater Range West, also in southwest Arizona; the Army's Ft. Irwin Front Gate and Fort Irwin Goldstone Sites in California; and the Army's Yuma Proving Ground in Arizona.

The agencies will ‘develop a pilot interagency process for the authorization of solar projects’ at these locations. Other locations – including in Alaska, where small-scale projects are planned – for future solar projects are set to be identified through additional studies called for under the terms of the MOU.

In addition, the DOI and DOD have launched an offshore wind partnership plan and a new coordination process intended to identify sites for geothermal project development on DOD lands.

All three types of renewable energy projects are expected to bring not only the usual economic and environmental benefits, but also some military-specific advantages.

‘Renewable energy projects built on these lands will provide reliable, local sources of power for military installations, allow for a continued energy supply if the commercial power grid gets disrupted, and lower utility costs,’ Panetta stated in the press release.

According to the MOU, the agencies will seek to enhance the projects' capabilities by investigating ways under which their electricity could be provided either to a single installation or ‘wheeled across a network of DOD installations.’ Excess power might also be sold to the grid if it can be done so in a safe, secure manner.

Additionally, in July, the DOI teamed with the U.S. Department of Energy to release a final programmatic environmental impact statement (PEIS) for solar development in Arizona, California, Nevada, New Mexico and Utah.

With the input of the Solar Energy Industries Association and other stakeholders, the PEIS established 17 ‘solar energy zones,’ which offer transmission access, comparatively low levels of conflict with environmental and cultural resources, incentives for solar project development and, ultimately, faster permitting. The zones cover approximately 285,000 acres of public lands.

However, embracing the full solar energy potential of the region's federally owned lands will require more than solar zones, according to a new report from the Center for American Progress (CAP). The think tank also calls for the adoption of a national energy standard of 80% clean energy (35% renewables) by 2035, a clean resources standard for public lands and waters, and major electricity transmission reforms.

The BLM currently oversees substantial percentages of land in several states: 68% of acreage in Nevada, 43% of Utah, 17% of Arizona and New Mexico, 15% of California, and 12% of Colorado, according to the CAP report. In all, those and other publicly owned lands could host 23,792 MW of solar power over the next 20 years.