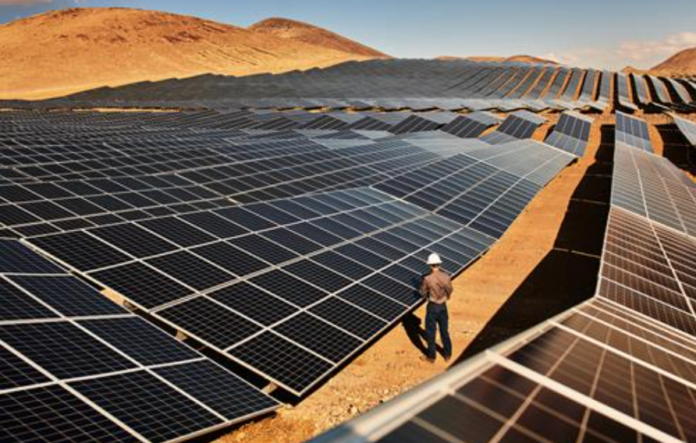 The new 61 MW DC solar farm is located on approximately 180 acres in the Reno Technology Park – a 2,200-acre industrial park shared between Apple and Turquoise Solar, who own approximately 1,600 and 600 acres, respectively.

“Turquoise is the largest single operating solar project in GREC’s portfolio to date, with many more great projects soon joining it from our construction pipeline,” says Charles Wheeler, CEO of GREC. “Completing it has been a huge accomplishment and is the product of a tremendous collaborative effort between the parties involved. We’re incredibly proud to have been part of it all. Despite an extremely challenging year across the country, 2020 was a year of growth for us as we continued to bring new wind and solar projects like this one online.”

The project has outperformed expected power generation to date despite lower-than-expected levels of sunshine. This strong performance has benefited from the service provider’s ability to keep the inverters at near-100% availability to generate clean power for Apple’s data center. Cypress Creek Renewables provides operations and maintenance for the project.

Construction of the project began in November 2019 and created 236 clean energy craft worker construction jobs – over 90% of which were filled by Nevada residents. It also represented a more than $60 million investment in Washoe County.

Much of the Turquoise Solar Project is located on rocky desert terrain with slopes ranging from 10%-30% which presented an engineering challenge. McCarthy, which served as the engineering, procurement and construction (EPC) contractor on the project, partnered with TerraSmart to design and engineer a plan for the site. The approach had the support of in-house and external consultants and hinged on TerraSmart’s fixed-tilt racking system, which utilizes ground screw foundations. The system proved more than up to the terrain and was able to handle drilling into the site’s rocks, hills and arduous soils. Through the collaboration, McCarthy and TerraSmart saved time and costs by minimizing clearing and civil work on the project, which also involved the installation and wiring of 156,000 bifacial 390 W ET Solar modules.

Over the past decade, McCarthy’s Renewable Energy & Storage group has completed, or is in the process of completing, construction on more than 50 utility-scale clean energy projects in communities across the country. These projects deliver a combined capacity of more than 4.2 GW of clean power production and 320 MW of energy storage to the communities they serve.

This huge solar farm is awesome to see. It’s great that big tech companies like Apple are stepping up and taking responsibility for their huge carbon footprint.