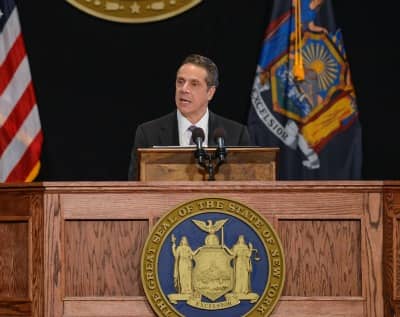 On Wednesday, New York Gov. Andrew M. Cuomo delivered his 2016 State of the State address and revealed some big plans for clean energy, including goals to make New York State coal-free by 2020 and to install more wind and solar power.

According to a transcript of the speech, Cuomo highlighted his commitment to a 50% by 2030 renewable portfolio standard (RPS) for the state. In late 2015, the governor directed the New York State Department of Public Service to design and enact such a mandate.

"We previously set a goal that 50 percent of New York's energy must come from renewables by 2030," said Cuomo in his speech." This year it's no longer a goal – it is now a requirement. And it makes New York the nation's leader in the fight against climate change, and that's something we should all be proud of."

Elsewhere in the speech, the governor said the state"will eliminate all use of coal in New York State by 2020. We will help the few remaining coal plants transition, but we must clean our air and protect our health, and that must be our first priority."

A policy book released by the governor's office to supplement the speech explains that Cuomo wants to close – or repower to cleaner fuel sources – the state's three remaining coal-burning plants. As such, he will direct the appropriate agencies to create a regulatory framework to ensure the transition is a success.

Furthermore, the policy book says the governor will collaborate with coal plant operators and host communities to prevent job losses or even to retrain workers for employment in the clean energy industry.

During his address, Cuomo announced a plan to help fund clean energy job training at the State University of New York (SUNY) and additional regional schools.

His focus on solar and other renewables didn't end there.

"I believe this is the economy of tomorrow, and while we're developing the business plan, we can also employ it in the state of New York," Cuomo said." I propose installing solar in over 150,000 homes and businesses and converting SUNY facilities to renewable energy by the year 2020. We can do it, and we should."

The policy book shows that Cuomo also proposes to add 300 more wind turbines in the state over the next four years, which will"increase New York's wind production by nearly 40 percent by 2020 for a total generating capacity of 2,200 MW, enough wind to power nearly 800,000 homes."

The policy book says a $150 million solicitation for large-scale renewable energy projects this year, as well as"new activities," created by the RPS, will help make the further build-out of wind power possible.

In his speech, the governor also called for boosting New York's Environmental Protection Fund, which he deemed"one of the most effective programs to make our state cleaner and greener."

"Protecting our environment is a top priority," he said." The Native American proverb is true:"We don't inherit the land from our parents. We are borrowing it from our children.'," Therefore, Cuomo declared he wants to raise the fund to"the highest level in history – $300 million."

"Governor Cuomo's remarks linked clean energy growth to new jobs for New Yorkers, and rightly so," says Anne Reynolds, executive director of ACE NY, in a statement." Wind power and solar power are real job growth areas. Our member companies are poised to ratchet up investment in New York under a strong clean energy mandate. Installing 300 new wind turbines by 2020 is a great interim goal and will help keep us on track for 50 percent renewables by 2030."

In addition to onshore renewables, Cuomo also appears dedicated to offshore wind. The policy book says," New York has 127 miles of coastline that present an enormous opportunity to generate energy through the deployment of offshore wind turbines."

However, the policy book adds," It is critical to ensure that offshore wind does not come at the expense of vital coastal habitats and economies, including tourism, fishing and boating."

To that end, the policy book says the state government will allocate $5 million to work with stakeholders and develop the New York Offshore Wind Master Plan focused on best practices for siting wind projects off the state's shores.