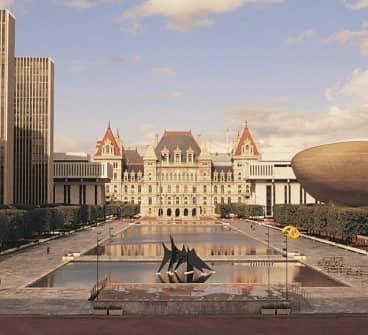 Gov. Andrew Cuomo delivered his 2012 State of the State address on Wednesday, outlining an ambitious plan to drive four-fold growth in New York's solar market by next year.

‘We have aggressively developed our hydroelectric resources and are making great progress in tapping our land-based wind resources. Now it is time to focus more attention on exploiting our solar potential,’ the governor said.

Cuomo did not offer program specifics, but he noted that the new NY-Sun Initiative will be aimed at bolstering the state's solar footprint, partly by expediting the procurement of commercial-scale projects. The governor also said he intends to expand rebate programs for small and midsize residential and commercial installations.

‘In its first year, the NY-Sun Initiative will be capable of doubling the customer-sited photovoltaic capacity that was installed in 2011,’ Cuomo said.

Carol Murphy, executive director of the Alliance for Clean Energy New York (ACE NY), tells Solar Industry that the state's solar supply chain is well positioned to rise to the governor's challenge. About 27 MW of capacity was installed in 2011, and ramping up to 100 MW or more per year within Cuomo's short time frame is achievable.

She notes that New York has done fairly well bringing small residential systems into the mix via rebates, but the large commercial and industrial sectors are largely untapped – and present a ton of potential. The state's net-metering rules were overhauled two years ago, and an important remote-net-metering measure recently went into effect. These developments have created a salubrious environment for multi-megawatt systems.

‘Solar has started to take off, but we've only had rebates for a small amount,’ she explains, noting that the new statewide, competitive procurement of large-scale systems will be a game-changer.

SUNation Solar Systems' Mike Bailis, who is a member of the New York Solar Energy Industries Association's board of directors, says Cuomo's focus on quickly ramping up activity in the solar sector is compelling, but he notes that the New York market needs more certainty to grow.

‘We need a long-term, sustainable policy,’ Bailis remarks. ‘We need to create something that's predictable.’

In concert with measures to support solar power, Cuomo expressed his desire to create a new ‘Energy Highway’ that will help accommodate more renewable energy – such as wind power in upstate New York and hydropower from Quebec – and spur economic growth in the state.

‘To make this happen, we will issue requests for proposals to implement a master plan,’ he remarked. ‘We believe private companies will finance and build $2 billion in infrastructure to complete the system and build the capacity to supply New Yorkers.’

Stephen Whitley, president and CEO of the New York Independent System Operator, which operates the state's electric transmission system, was encouraged by the governor's plans. He wrote in a statement that Cuomo's address ‘clearly articulates the need for sustained investment in the energy infrastructure of New York.’

‘Upgrades to the transmission system can make more effective use of statewide generating resources, including the renewable resources being planned and developed throughout upstate New York,’ Whitley stated.