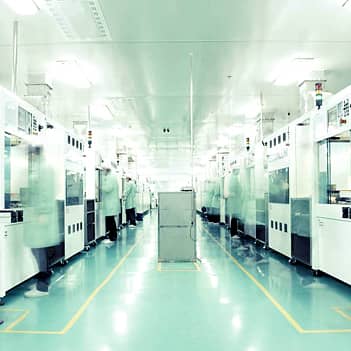 Solar photovoltaic equipment spending (covering crystalline silicon ingots to modules, as well as thin-film) was $3.6 billion for 2012 – a 72% decline from the peak of $12.9 billion in 2011, according to the latest NPD Solarbuzz PV Equipment Quarterly report.

‘Spending for 2013 is forecast to decline even further to $2.2 billion – levels not seen in the industry since 2006,’ says Finlay Colville, vice president at NPD Solarbuzz. ‘This marks an effective halt to capacity investment by PV manufacturers, as well as a lack of upgrades, whether in new technology or higher efficiency.

Based on PV revenues recognized in calendar year 2012, the leading equipment suppliers are forecast to be GT Advanced Technologies, Meyer Burger, Applied Materials and Apollo Solar. These tool suppliers are expected to have PV-specific revenues in excess of $400 million.

Only eight PV equipment suppliers are forecast to have PV-specific revenues during 2012 in excess of $100 million, compared to 23 in 2011, according to the report.

Just 24 months ago, GT Advanced Technologies, Meyer Burger, Applied Materials and centrotherm each reported PV backlogs at or above $1 billion. However, successive quarters with minimal new order intake, coupled with strong de-bookings, have reduced PV equipment backlogs to levels last experienced in the first half of 2006. 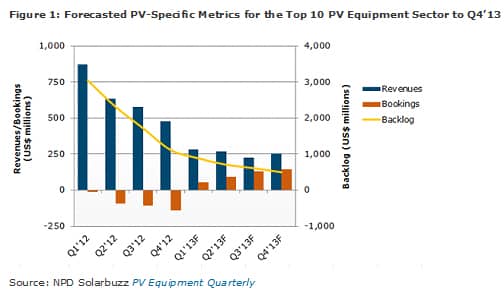 ‘PV equipment suppliers now find themselves a victim of their own success,’ explains Colville. ‘Excessive investment in 2010 and 2011 was the catalyst of the over-capacity and over-supply situation that exists today. It was also a key factor in end-market price erosion that forced many of their customers to file for insolvency.

‘The days of PV-specific backlogs and revenues at the billion-dollar level are unlikely to be repeated for at least three years,’ he adds.

With so much competitive crystalline silicon capacity shipped during 2011 and 2012, the biggest fear for tool suppliers is the emergence of a secondary equipment market across China and Taiwan. Most importantly, this market would delay any upturn in equipment spending. However, it also suggests that the PV industry is not conforming to a collective roadmap or experiencing a significant technology-buy cycle.

‘Today, there are actually two factors that may result in legacy capacity being recycled,’ notes Colville. ‘First, the forced consolidation of tier-one and tier-two crystalline manufacturers in China would prevent any strong shakeout of excess capacity within China. Also, trade wars may result in surplus capacity simply being relocated outside China to avoid import tariffs, with overseas countries welcoming any resulting job creation.’

During 2012, performing a market-share analysis for key tool suppliers to the PV industry was of limited value, NPD Solarbuzz says. A large part of revenues was based on tools shipped at the end of 2011 or new shipments required by legacy contracts. Indeed, the focus of equipment suppliers has now shifted from gaining market share within the PV industry to deciding how to restructure manufacturing and streamline PV research and development.

‘Tool suppliers are finally acknowledging that high-efficiency upgrades are not going to offer any short-term salvation during 2013,’ says Colville. ‘However, it remains imperative to equipment suppliers that efforts remain targeted at enhancing efficiency and understanding which technology road map will help them gain market share when spending finally returns.’