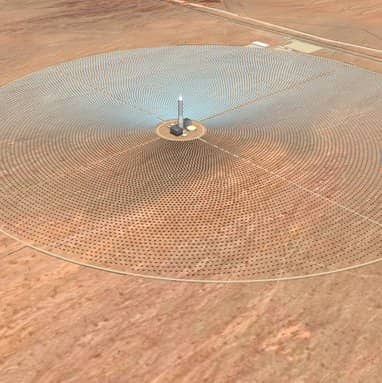 As the U.S. solar market continues to reach new heights, both photovoltaics and concentrating solar power (CSP) will be required in order for the industry to achieve future goals. Given the inherent advantages and disadvantages of each of these technologies, diversification within a single company is becoming an increasingly popular strategy.

Developers and equipment suppliers that work with both PV and CSP enjoy attractive synergies, according to executives who spoke during a recent conference call sponsored by the Solar Energy Industries Association (SEIA). These companies can broaden their geographic range, help utilities meet renewable energy mandates in a more grid-friendly fashion, and contribute more fully to the industry's aggressive solar deployment goals.

‘Several years ago, we realized that several types of technology would be deployed at utility scale for solar,’ said Tom Georgis, senior vice president of development at Santa Monica, Calif.-based developer SolarReserve. ‘We made the decision to diversify to include PV projects.’

Two weeks ago, SolarReserve received a $737 million loan guarantee from the U.S. Department of Energy (DOE) for its 110 MW Crescent Dunes Solar Energy Project under development in Tonopah, Nev. The plant's proprietary molten-salt power-tower technology allows it to deliver power as a baseline operating facility or as a peaking facility eligible for favorable time-of-day pricing, Georgis noted.

However, all CSP technology relies on high solar resources, thus limiting its footprint. ‘PV affords us the opportunity to expand beyond the American Southwest,’ said Georgis. For its PV efforts, the company is involved in a joint venture with GCL Solar, a subsidiary of China-based silicon manufacturer GCL Poly.

For utilities, varying the size and type of solar power projects brought online can help mitigate the grid-connection issues that have historically challenged renewable energy integration.

On one end of the spectrum, APS has a power purchase agreement in place with Abengoa for the Solana plant, a 250 MW trough CSP facility under construction in Gila Bend, Ariz.

On the other end, the utility currently has five contracts totaling 80 MW in place under its Arizona Sun Initiative, which focuses on small- to medium-scale PV. The Arizona Sun projects will utilize lines with voltages of 68 kV and lower, in order to speed connection and minimize system impact.

‘We recognize the difficulties in getting interconnected through the Federal Energy Regulatory Commission process, because of the time it takes,’ Dinkel said.

Concurrently, APS is also pursuing residential-scale PV deployment under a program that will deliver solar arrays to up to 200 customers who will buy power under the community power rate. ‘We're trying to test what saturation on one feeder looks like,’ Dinkel explained.

Residential PV faces its own set of policy hurdles nationally, but both CSP and utility-scale PV development remain particularly vulnerable to the whims of policymakers. The DOE's loan-guarantee program – which, according to SEIA CEO and President Rhone Resch, has filled a critical finance void over the past few years – is set to expire at the end of the year.

Many industry executives have expressed little faith that the program will be extended and are now operating under the assumption that it will no longer exist in a matter of months.

‘What the industry needs is clarity and surety – for the company and for investors at both the corporate level and the project level,’ he said. ‘Absent that, it will certainly be challenging in the short term for the U.S. market. We want to attract additional investment.’