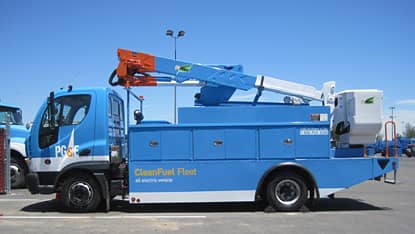 Pacific Gas and Electric Co. (PG&E) says all of its nearly 100 operations service centers in Northern and Central California will be 100% powered by solar energy through the utility's Solar Choice program.

Available in early 2016, the new program will give customers the option to purchase 50% or 100% of their electricity from solar sourced from new small to mid size solar projects in PG&E's service area. The announcement was timed for ‘Action Day’ (Dec. 5), connected to the global climate talks in Paris, wherein governments and businesses around the world unveil initiatives to reduce carbon emissions. PG&E is part of the California delegation attending the events in Paris.

By choosing the Solar Choice program for its operations service centers – where local crews, vehicles and equipment are based – PG&E says it aims to raise awareness of the program and encourage customers to consider signing up, as well.

PG&E's Solar Choice is designed to broaden access to solar power to include customers who are unable to install rooftop solar panels. PG&E says that under the program, enrolled customers will pay a modest cost premium each month. The utility intends to sign power purchase agreements for new solar resources to meet the requirements from facilities ranging in size from 0.5 MW to 20 MW.

‘Solar power is critical to achieving California's goals to reduce greenhouse-gas emissions, and we strongly support its growth – whether it's for customers who install rooftop solar or for others through our Solar Choice program,’ says Geisha Williams, president of PG&E's electric operations.

PG&E has also recently pledged to pursue a number of actions to reduce its carbon footprint, as part of the White House's American Business Act on Climate initiative aimed at rallying support from U.S. companies ahead of the Paris conference.