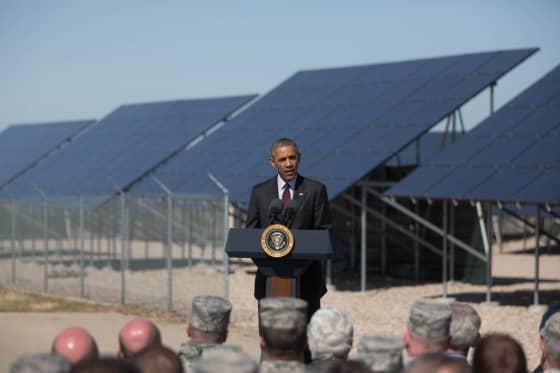 U.S. President Barack Obama has set a goal to train 75,000 workers – including military veterans – by 2020 for the growing solar energy sector.

The president made the announcement at Hill Air Force Base in Utah as part of an event focusing on clean energy technology.

The new goal – up from the figure of 50,000 announced a year ago – builds on the progress of the Department of Energy's (DOE) Solar Instructor Training Network (SITN), which includes nearly 500 partnering educational institutions across the country.

The Interstate Renewable Energy Council (IREC), the national administrator of the SITN, says that more than 1,000 solar instructors have been through the full program and that an estimated 30,000 students have received some amount of training. IREC says it works with nine SITN regional training providers and others in the industry to develop a qualified solar workforce that matches training with evolving industry needs.

Obama also mentioned the launch of the Solar Ready Vets Program, a DOE effort in partnership with the Department of Defense in which veterans at 10 military bases across the country will receive solar training before they leave military service.

‘I had the pleasure to help shape the first pilot veteran training programs that took place over the last several weeks,’ says Joe Sarubbi, SITN project manager. ‘They will serve as models for the expanded initiative announced by the administration. We were so proud to report that the graduates from the first three-week training program at Camp Pendleton all received job offers.’