Given that California leads the U.S. in both solar installations and farming, it should come as no surprise that the state's market for agricultural PV projects has taken off dramatically. Developers and installers active in this space recognize that farms offer potentially lucrative business opportunities – but also require a unique approach to sales, finance and project construction.

Nader Yarpezeshkan, director of sales and corporate development at Carlsbad, Calif.-based Cenergy Power, reports a notable increase in the agriculture sector's solar adoption rate over the past year.

‘The ag community is extremely risk-averse,’ he explains. ‘Now, with megawatts of solar in the field, they see it as a battle-tested technology.’

Moreover, due to the nature of their business, farmers are often already accustomed to multi-year waiting periods for their returns on investment, notes Ryan Park, director of business development at San Luis Obispo, Calif.-based REC Solar.

This mindset means that solar's long-term savings can offer particular appeal, he explains. Farmers also tend to already own their land and buildings and pay for their own power – making them excellent candidates for PV.
{OPENADS=zone=72&float=right}
In recent years, the industry has seen power purchase agreements (PPAs) and similar contracts become the dominant finance structure for commercial PV projects. Agricultural installations, however, buck this trend.

With the exception of a few large, publicly traded companies, most farms own their PV systems, buying them with cash or, less commonly, financing them.

‘Many farmers don't believe in debt,’ Park says, adding that some small, family-owned agricultural businesses opting for solar are not only uninterested in PPAs or a major loan, but also ineligible, as they may lack an audited investment credit history. 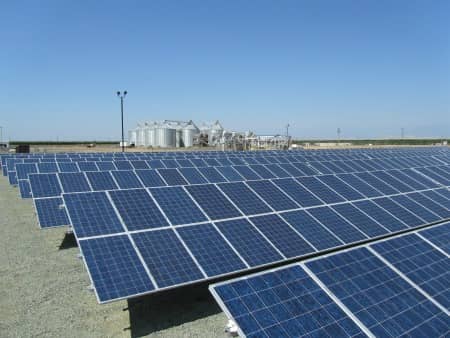 To start, the seasonal and variable nature of the business may cause dramatic fluctuations in the facility's energy load profile and future demands, Yarpezeshkan says. Crop size and weather conditions, for instance, can affect energy demands, and this analysis must be considered during the system design phase.

Permitting the PV array can also pose challenges: In California, the Williamson Act, which is designed to preserve farmland, can preclude the installation of solar at certain locations, Park explains.

‘You don't want to remove crops to put solar in, but it's not so black-and-white,’ he says. For instance, a given cold-storage facility may be located on 10 acres of Williamson Act-protected land, but the owner may use only four of those acres for actual processing operations.

In complex cases, Park recommends that solar developers work with local experts and county boards to provide education and see if an exception can be granted – a potentially lengthy process. ‘You can't just come in and bully them around,’ he says. ‘It's going to take a long time – six months or longer.’

Ground-mounted systems represent the bulk of agricultural installations for both Cenergy Power and REC Solar. Park estimates approximately 80% of the company's agricultural projects larger than 100 kW use ground-mount structures, while the smallest systems (under 50 kW) may be sited on packing sheds, loading barns and other suitable structures.

Fortunately for system owners and integrators alike, farms tend to offer a wealth of open, no-slope space – whether in a field or on a flat roof – with generous, interference-free solar irradiance. In contrast, ‘When you install on a corporate campus, sometimes you have to deal with high rises, shade and mechanical issues, which increases your levelized cost of energy,’ Park points out.

For agricultural installations, as is the case in other sectors, fixed systems generally make the most sense. ‘We are not seeing many trackers being installed these days,’ Yarpezeshkan reports. ‘The cost of solar has come down to the point where trackers are not justified.’ 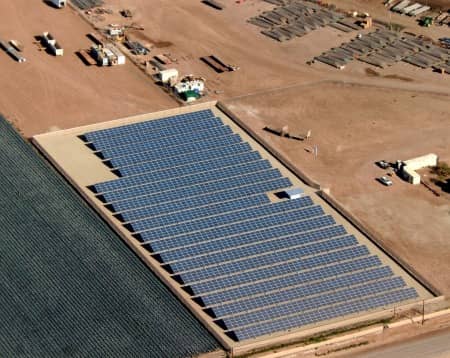 With their understanding of machinery and maintenance principles, farmers are especially likely to favor a system that minimizes moving parts and failure points, Park adds.

Installation principles
Once the system is permitted and designed, construction must be carefully coordinated in order to avoid the farm's high-activity periods, such as harvest season. Installers must also keep in mind that an agricultural installation is likely to be exposed to especially harsh elements during its lifetime.

‘The installer should construct the system to withstand the environmental conditions – extreme weather, pests, theft, dust, etc.,’ Yarpezeshkan says, noting that his team has worked with several clients dealing with agricultural installations from other installers that failed to take into account these requirements.

Subpar solar array workmanship in any setting must be avoided, but the ramifications in the agricultural market could be especially severe. Yarpezeshkan and Park stress that penetrating and succeeding in this project niche – perhaps more so than others – involves building trust.

‘It's a people business in the ag space,’ Park says. ‘They've been around for families and generations, working in the local area. Families talk – it's good, old-fashioned business.’

‘Although the agriculture market is fertile, there are barriers of entry,’ Yarpezeshkan warns. ‘Sales in the ag community are heavily based on track record and word of mouth. Good news travels fast and bad news – twice as fast.’