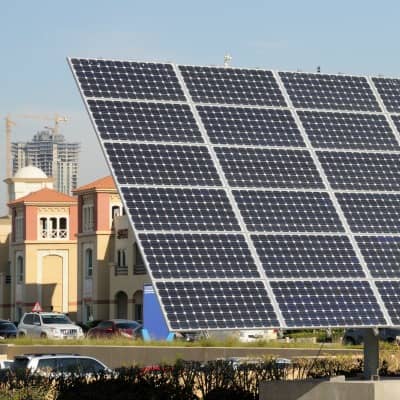 Solar photovoltaic demand from the Middle East and Africa (MEA) region is set to grow 50% in 2014, according to new research from NPD Solarbuzz. Between 2014 and 2018, annual PV demand will nearly triple as the MEA region becomes a key market for the global industry.

Previously, the region had a substantial share of small off-grid PV systems. However, the grid-connected segment became the main factor driving growth to more than 1 GW in 2013, NPD Solarbuzz says, with 1.6 GW forecast for 2014. In 2018, ground-mount systems will account for over 70% of the market.

Until now, PV growth in the MEA region has been predominantly driven by a small number of economically prosperous countries, including South Africa and Israel. Along with Saudi Arabia, these three countries are expected to offer stable demand levels within the MEA region over the next few years.

‘Solar PV represents an ideal renewable energy type across much of the Middle East and Africa,’ says Susanne von Aichberger, analyst at NPD Solarbuzz. ‘Even so, market drivers and constraints differ greatly between the two regions.’

In most of the Middle East, renewable energy is seen as a means of preserving domestic oil and gas reserves. NPD Solarbuzz Middle East PV demand is forecast to reach 2.2 GW in 2018, with an upside potential of 4 GW. Israel is projected to be the largest PV market in the Middle East in 2014, mainly through solar parks and rooftop systems that benefit from net-metering policies.

Saudi Arabia's ambitious renewables program will finally start to materialize this year, the report says, making the kingdom the largest PV market in the MEA region by 2016. Saudi Arabia is forecast to add 2.4 GW of new PV capacity between 2016 and 2018. Other key solar PV markets in the Middle East include the United Arab Emirates, Jordan and Kuwait.

PV demand from Africa is forecast to reach 2.2 GW by 2018, with an upside potential of 6 GW. With a shortage of electricity within Africa in general, solar PV is considered suitable for helping to stimulate social and economic development in the region.

African PV demand will continue to be dominated by South Africa this year, the report says, due to the construction of large-scale PV projects resulting from the Renewable Energy Independent Power Producer Procurement Program.