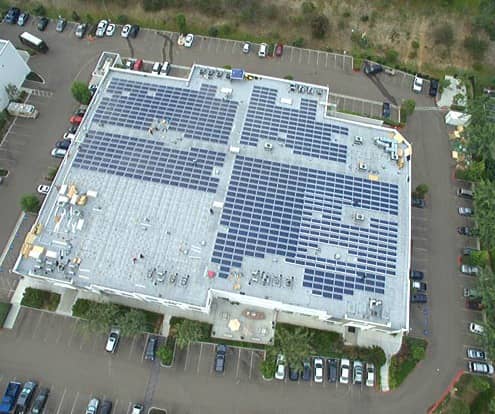 Laguna Beach, Calif.-based Ra Power & Light has completed a 270 kW commercial rooftop solar installation for defense contractor Aethercomm's facility in Carlsbad, Calif.
Ra Power & Light developed the photovoltaic project and provided engineering, procurement and construction services at the customer site. The project posed a number of challenges due to the nature of the customer's business and its financial requirements.

As a provider radio-frequency electronics for various military applications, Aethercomm operates under security restrictions imposed by the U.S. Department of Defense (DOD). From a project-management perspective, the customer site was a challenge unto itself.

‘It's a DOD-regulated facility,’ says Michael Campbell, CEO of Ra Power & Light. ‘You have to have a U.S. passport to enter that building.’

In order to meet those constraints, Ra Power & Light constructed an independent scaffolding system near the facility's loading dock to provide safe and secure access to the roof of the building. Campbell says his company provided a 40-foot cargo container to secure tools and materials so they would not have to be brought back and forth to the site through checkpoints. Portable lavatories and wash stations were also provided.

An interesting aspect of the project was that Ra Power & Light commissioned aerial photography of the work site at weekly intervals so the client could see the progress of the work. Campbell says the photos drove all of the ambiguity out of the project's status without making the clients climb the scaffolding. ‘We also got some nice shots of the SunLink racking and mounting system on the roof without the panels,’ he adds. ‘People don't see that very often.’

Ra Power & Light is also offering a 10-year warranty on the project, as well as a separate 10-year operations and maintenance service in partnership with True South Renewables. Campbell says the proper design on the front end combined with the use of bankable equipment and the experience to optimize the system for the structure mitigates most of the risk on an installation warranty.

The construction phase occupied only the final few months of what Campbell describes as a 25-month process. Most of the work involved Aethercomm going through its own approval process. The pitch, such as it was, did not require much effort, he says, because the company's CEO was very solar friendly.

‘The value proposition has to make sense for operations, finance and executive management,’ Campbell says. ‘In the case of finance, the important metric was that the project be revenue neutral andÂ deliver operational improvements. This kept it from being a capital expense.’

Ra Power & Light specializes in cash-deal commercial and industrial (C&I) solar projects, which Campbell describes as the unicorn of solar – highly sought after and very elusive. The company does not pursue power purchase agreements. Aethercomm put up about 20% of the cost of the project and financed the rest. ‘It is very difficult to find people who can navigate the board room and find senior-level executives to support a seven-figure solar project,’ he says.

In order to catch the unicorn, Campbell says Ra Power & Light has developed a targeted approach that requires a very precise understanding of the prospective client's business. At the same time, Campbell says the appreciation for solar in the C&I market is substantially better than it was five years ago.

‘Many managers have solar on their houses,’ he says. ‘The customer has a progressive, forward-leaning CEO. And this is a building full of Marines!’ 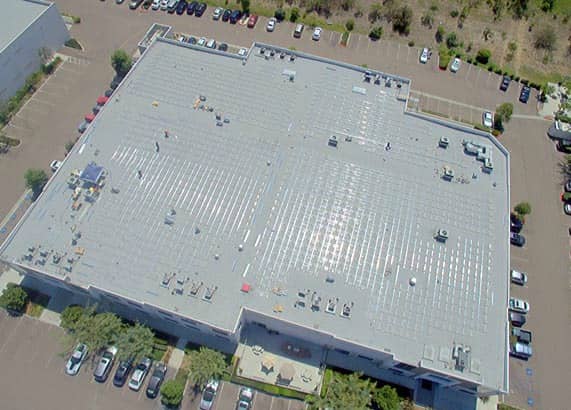 Aerial photography showed the progress of the work. Here, the SunLink ballasted mounting system has been installed. Photo courtesy of Ra Power & Light