Calling it the largest solar thermal hot water system installed on a given property in California, Sean Neman, co-founder and president of ReGreen, says the design had to take into consideration the location of a significant number of elements on the roof of the eight-story commercial building, including vents, elevator shaft towers, fire escape walkways, multiple air conditioning condensers, rooftop boilers, rooftop bathrooms, rooftop patios and pools.

‘We had to consider the shade factor of surrounding buildings and rooftop elements during different times of the year, as well as the orientation of the collectors and the aesthetics from the ground and rooftop public areas," Neman says. ‘We designed the DHW systems to be charged with non-toxic glycol to be environmentally friendly, while preventing any possible freeze damage to the system from occasional low temperatures.’

Kevin Refoua, vice president of operations at ReGreen, estimates that the customer will offset 61% of the building's thermal demand and experience a 70% reduction in the gas bill.

Nevertheless, the thermal solar project did not sell itself. Neman says the customer had not had any previous experience with solar power in general and solar thermal in particular.

‘It took me six months to set up a meeting,’ says Deborah Stewart, vice president of sales at ReGreen. ‘And once I did, there was an education process, as with anything outside of someone's comfort zone.’

Stewart says the financials make a compelling case if the prospective customer can be encouraged to take a bird's-eye view of the economics. Stewart estimates that project payback for the Lorenzo installation is less than three years, including a $500,000 incentive from Southern California Gas and the 30% federal investment tax credit.

Once ReGreen had the contract, it was part of a team of about 200 contractors on the site.

‘We affected and were affected by electricians, plumbers, roofers, structural engineering, structural concrete contractors, sheet metal workers, low voltage wiring and multiple other contractors,’ Neman says. ‘Coordinating with the large number of other contractors could have been very challenging – and it frequently was – however, the building owners and site superintendents were very organized. They held weekly meetings and were supportive and excited to be having solar installed.’

Solar power – and perhaps solar thermal systems in particular – is still a relatively new industry to many public agencies, even in a solar-friendly state like California. As a result, Neman says, the rules and regulations are constantly changing. For the Lorenzo project, ReGreen needed permits for plumbing, electrical, building, pressure vessel and mechanical work, all with structural engineering certification.

‘As you can imagine, the permitting process on a project this large has room for improvement,’ he says. 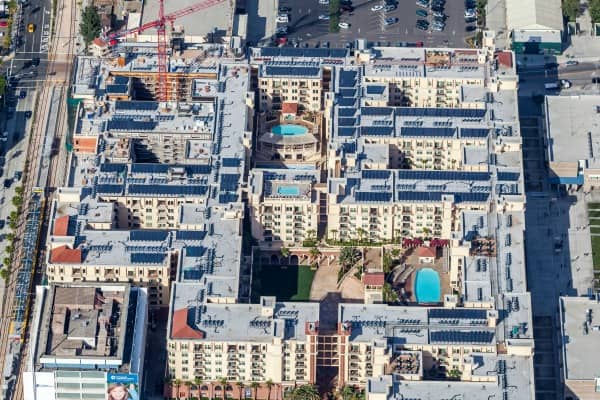